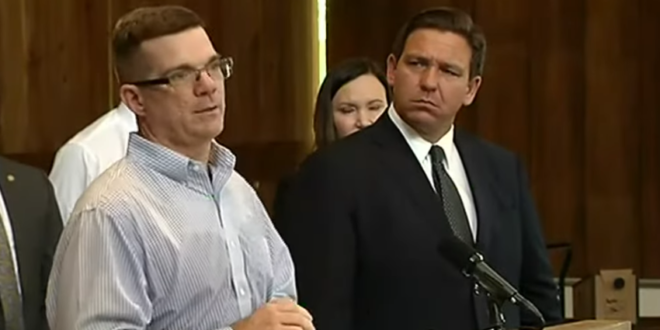 Gov. Ron DeSantis on Tuesday denied hearing a false comment that the COVID-19 vaccine changes human RNA, even though he was standing next to the person when he made it. “Honestly, I don’t even remember him saying that, so it’s not anything I’ve said,” DeSantis said in response to a reporter’s question about why he didn’t immediately dispute the statement.

“The vaccine changes your RNA, so for men, that’s a problem,” Gainesville city employee Darris Friend said. “It’s about our freedom and our liberty. It’s not about the vaccine.” A video of DeSantis posted by Kevin Cate, who works for Democratic candidate for governor Nikki Fried, shows DeSantis looking directly at Friend as he spoke and then turning his head down as he made the comment.

The Lincoln Project is arguing Ron DeSantis is the “worst Governor in America” in a new ad released Wednesday. The video starts with some file news footage from the peak of the Florida COVID-19 resurgence this summer, with descriptions of a state in “crisis,” the “hot bed of the pandemic.”

“Where’s Ron DeSantis,” a crisp female voice asks, “Laughing it up in New Jersey, raising money for himself. He ran as a mini-me Trump. Now he’s trying to prove he’s more Trump than Trump and doesn’t care how many Floridians have to die,” the voiceover continues. “Ron DeSantis: the worst Governor in America.”

Moments ago, @GovRonDeSantis let someone stand behind the Seal of Florida and say: “The vaccine changes your RNA.”

It does not. No corrections. No shame.

The worst governor in America. pic.twitter.com/nBXFMV4jIe