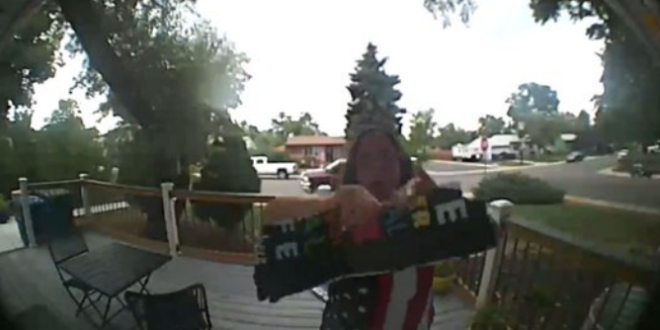 A couple’s equality yard sign is taped up and now behind a window after they say a neighbor destroyed it, and the whole ordeal was caught on camera. The homeowners’ Ring doorbell camera captured the woman going on a rampage on the yard sign Saturday afternoon.

Sheridan police identified the woman in the video as Krystal Barczak. She was cited for criminal mischief for tearing up the sign. Denver7 reached out to Barczak and received a response Sunday evening.

“I am extremely ashamed of my behavior and very sorry. I had an emotional breakdown over the remembrance of 9/11,” she said in a message. She continued that it was no excuse for her behavior.

The couple says they’ve never met the woman. Their neighbors told the above-linked outlet that she lives nearby.

A Sheridan woman, wearing a 🇺🇸 shirt, was caught on camera yesterday destroying a neighbor’s equality yard sign. You can see & hear the rage as she tears it apart. @SheridanPolice cited her for criminal mischief.

This is what the sign looked like today, now taped back together and hanging behind a window. pic.twitter.com/ivyMaSCfb0

@MaryKay One of your consultants Krystal Barczak in Sheridan Colorado is seen destroying her neighbors property (a sign about love & equality). Is this the person you want representing your company?