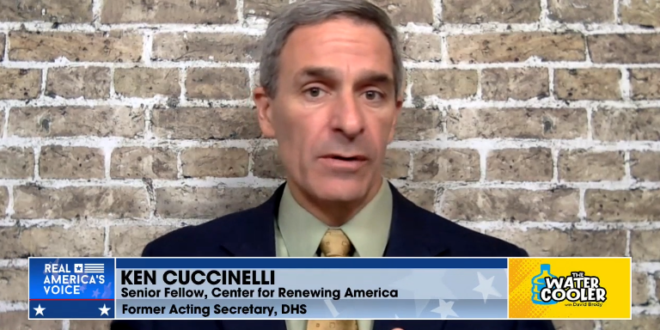 Cuccinelli: Dems Are Bringing Afghans To Destroy Us

“It isn’t just our southern border. It’s come in from anywhere. We don’t care who you are or how dangerous you are, come on in. It’s only the Republicans who are the threat. It isn’t people from other countries, some of whom may want to destroy our country. I mean, that is the attitude of this administration.

“And the Somali experience in Minnesota is not a good one for America. This is not a case of assimilation. This is a case of setting up a balkanized pocket within the United States. And, yes, we are a country of immigrants, but that presumes that we’re a melting pot.

“If you refuse to melt in, and I would suggest that the data we have on the average Afghan suggests that’s a possibility, a strong possibility, and we’ve seen it with the Somali community in Minnesota, then you shouldn’t be immigrating here. More accurately, America shouldn’t be letting you immigrate here.

“They really want to atomize this country. They want to atomized families, heck, individuals. They want to treat you as having however many genders you want. They believe that kind of societal destruction and chaos works to the advantage of their political power. And I think that’s true.

“But it also works to the destruction of us all in the not very long run.” – Former Trump Deputy Homeland Security Secretary Ken Cuccinelli, speaking today on David Brody’s Real America’s Voice show.

Previous AZ Health System Reports Horse Paste Hospitalizations
Next Hospital: If You Want A Religious Vax Exemption, You Must Swear Off ALL Drugs Developed With Fetal Cells