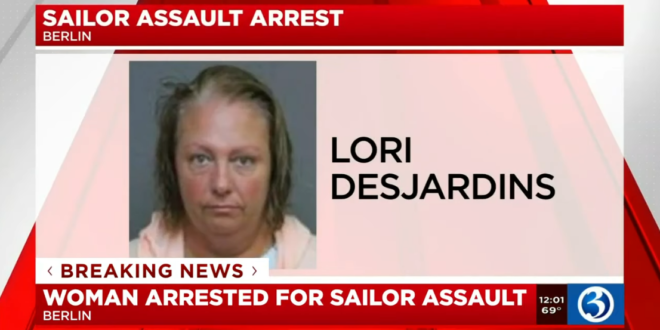 The woman at the center of a viral video accusing a Navy sailor of wearing a fake uniform was arrested. Berlin police on Friday identified the suspect as 45-year-old Lori Desjardins of Southington. Channel 3 also learned on Friday that Desjardins worked for CVS Health.

“This individual is no longer employed by the company,” said Joe Goode, director, corporate communications for CVS Health. Police said they served Desjardins an active arrest warrant that charged her with third-degree assault and second-degree breach of peace.

In the video that went viral on social media, Desjardins was seen at the Central Pizza restaurant in Berlin on Saturday night yelling at U.S. Navy sailor Sean Nolte Jr. The Naval Submarine base in Groton confirmed to Channel 3 that he is a student at the submarine school.

Read the full article. My first post on her is here.

This is Sean Nolte Jr., the Navy submarine school student in Groton who became the target of a lady’s rage inside Central Pizza in Berlin. He’s from Pennsylvania. pic.twitter.com/dAlAjM9c87

EXCLUSIVE: We caught up with the woman seen yelling at & hitting a Navy sailor in a viral video while she was leaving the Berlin Police Dept. this morning after meeting with investigators. She didn’t have anything to say. @FOX61News