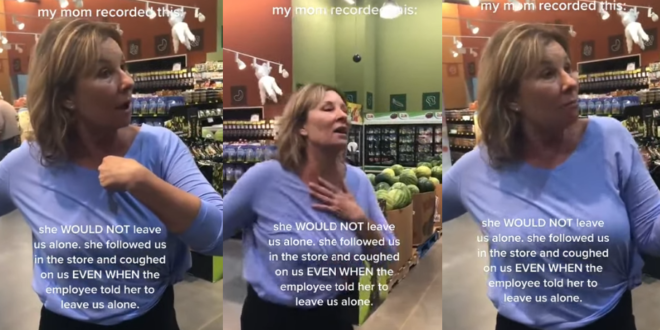 It took less than a week for the internet to track down “Coughing Karen,” a woman seen in a recent viral video following and coughing on a mother and daughter in Lincoln, Nebraska. The woman, once identified, was let go from her job.

Within days of the video going viral, internet sleuths had identified the woman as Janene Hoskovec, an Arizona native and employee of SAP, a software company based in Germany.

Some felt the firing wasn’t enough, however, and called for Hoskovec to face legal consequences for her behavior. A few even reported her to the local district attorney’s office. Everyone else, viewed the entire situation as an excellent example of “fuck around and find out.”

The health and safety of our employees and the communities in which we live and work are of utmost concern to us. We are taking the matter of an SAP employee incident very seriously and investigating the situation.

We have reviewed the incident and can confirm that the individual in question no longer works for SAP.

My daughter had to experience this in #lincoln #nebraska she followed them around and was #spitting on them. #karen #covid #mask #maskup #craycray #delta #spit. pic.twitter.com/8MhpBVWrSx

She instigated the whole thing. Picked a mother/child to harass. Think they just wanted to get away. Lady kept following them. Some other folks stepped in. The Super Saver they were at didn’t really do anything – tell the lady to leave/wear mask, etc.. they just broke it up.