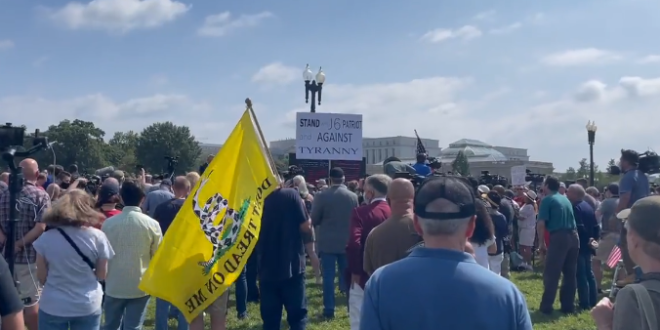 A far-right rally organized to protest those charged in connection with the deadly Jan. 6 insurrection has appeared to draw a small crowd of people, according to circulating news footage and images on the ground.

News of the crowd came after significant buildup of security forces and the resurrection of a protective fence around the U.S. Capitol amid concerns from officials of violence and chaos reminiscent of the January attack.

A small crowd of attendees began to gather at the Capitol on Saturday morning ahead of the scheduled demonstration dubbed the “Justice for J6” rally. Reporters and videographers on the ground in Washington noted that there seemed to a heavier presence of police and press than actual rallygoers.

More people would have shown up to #JusticeforJ6 but those ventilators are heavy.

What an adorable tiny sore loser rally. Starbucks stays more packed than this. Real #JusticeforJ6 would be the arrest of all the domestic terrorists who stormed the capitol that day. pic.twitter.com/Kc0mGwiq2R

It looks like the #JusticeforJ6 “Rally” could have been an email. pic.twitter.com/YLfxWOiBb4

The very small crowd size at the #JusticeforJ6 traitorous rally shows the waning influence of the former President. https://t.co/zdf0GCTlFs

#msnbc RT Worst zoom meeting EVER! It looks like the #JusticeforJ6 “Rally” could have been an email. #Seattle #waleg #vanwa #Portland #orleg #Maddow #THEweek #BlackLivesMatter

Donald Trump waves to everyone at the #JusticeForJ6 rally pic.twitter.com/WME4YbFTGt

#USCP in riot gear, on the west side of the #Capitol. Part of the panoply of heightened security in place for #JusticeForJ6. Helicopters, police from other jurisdictions, bicycle police, fencing, street closures, surveillance systems with facial recognition… pic.twitter.com/LdqxPpoSBZ

Speakers have commended and Matt Braynard has instructed attendees to go home. One attendee was overheard asking what time the Capitol will be stormed today. Officers encourage everyone to remain vigilant. #JusticeforJ6 #DC #Oklahoma pic.twitter.com/6aQubiVIsj