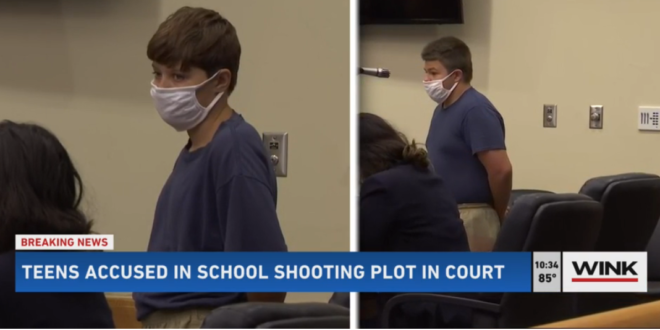 The two teens accused of plotting a school shooting in Lee County appeared in front of a judge Sunday morning after they were taken into custody on Saturday. Connor Pruett, 13, and Phillip Byrd, 14, will be held for 21 days in secure juvenile detention.

Witnesses were questioned and a map of the school was found that included the locations of surveillance cameras. Lee County Sheriff Carmine Marceno said the two were plotting a school shooting that would mirror that of Columbine in Colorado and Parkland in Florida.

During the course of the investigation, detectives said they discovered Pruett and Byrd were “extensively studying” the 1999 Columbine High School shooting and trying to figure out how to purchase firearms on the black market.

Lee County Sheriff Carmine Marceno said that the pair were “well known” to the sheriff’s department and that deputies have responded to calls for disturbances at their homes multiple times. “This could have been the next Parkland massacre, but we stopped them in the planning stages,” Marceno said.