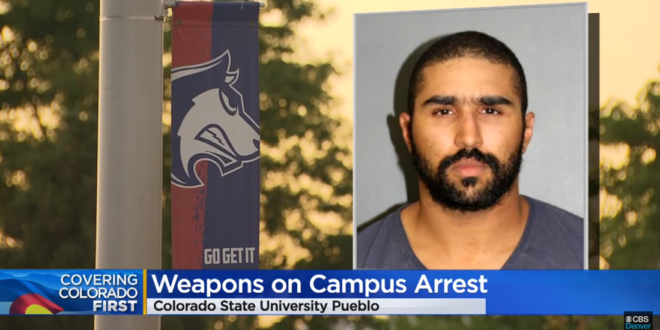 A Colorado State University Pueblo student arrested Tuesday for having a large cache of loaded weapons on campus allegedly told other students and CSU Pueblo staff he fantasized about setting off pipe bombs in the university courtyard and gunning down other students as they fled. The Pueblo County Sheriff’s Office says that Robert James Killis, 24, made terroristic threats to university staff and students and “appeared to be in a planning stage” for an active shooter event prior to his arrest.

According to the affidavit, Killis’ threats included telling another student he was going to learn to make pipe bombs to “deal with some anti-governmental issues.” A witness who worked with him in the program told PCSO detectives Killis holds “extreme anti-government and anti-vaccination views” and “does not like anyone with power telling him what to do” according to the affidavit.

Rep. Lauren Boebert’s new best friend: “A Colorado State University Pueblo student was arrested for having a large cache of loaded guns on campus. He told others he wanted to set off pipe bombs and gun down students as they fled:” https://t.co/C29BSy2XAD #coleg https://t.co/nZetDwaGju

When detectives obtained a search warrant for the suspect’s property and truck, they found an AR-15, a shotgun, two handguns, a bulletproof vest, many high-capacity magazines, and 1,000 rounds of ammunition – some of which was “green tip” ammunition made to pierce body armor.