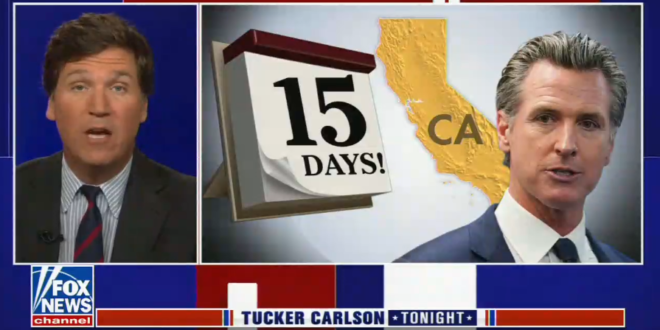 “Well, in 15 days, the long-suffering residents of the State of California will have a chance to hold someone accountable, their governor, Gavin Newsom, who has so mismanaged the state they can’t keep the lights on, crime is skyrocketing, wildfires are so bad right now at Tahoe, people can’t go outside.

“We can’t answer those questions, we’re not election officials. What we can say is, in 15 days, democracy has a chance to work. Let’s hope that it does.” – Tucker Carlson, in one of his most outrageous lies. And that’s saying something.

Tucker Carlson lies for money on behalf of the Republican Party. Think the California Republican Recall isn’t a national election? Hey, Fox News is willing to LIE to help the GOP win. https://t.co/G6guLg2nee