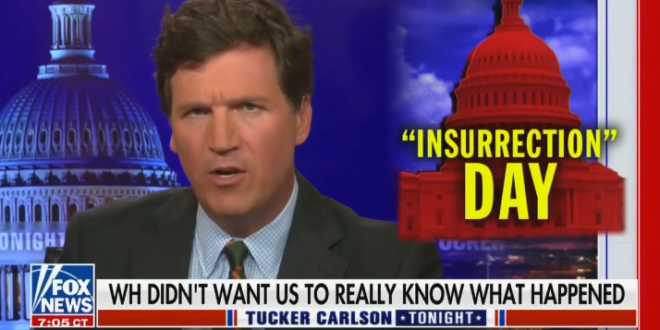 Tucker Carlson attempted to completely rewrite the history of the January 6 Capitol riot by severely downplaying it on his show Thursday night, saying those who breached the Capitol looked like “tourists.”

He also suggested that federal agents played a key role in storming the building. Carlson selectively showed footage of Capitol breachers engaged in nonviolent behavior. One clip he aired depicted people milling about in the Senate wing of the building.

“You don’t see people hiding bombs, or using bayonets, or firing weapons trying to take over the country with an insurrection,” said Carlson. “You see people walking around and taking pictures. They don’t look like terrorists, they look like tourists.”

‘They Look Like Tourists’: Tucker Carlson Downplays Capitol Riot, Then Suggests It Was an Inside Job https://t.co/SEm0cb7YWM