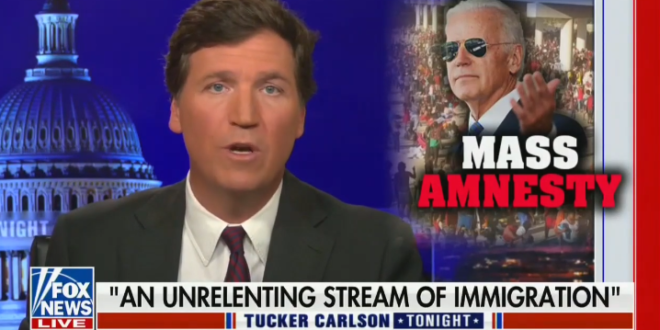 Tucker Carlson said the quiet part out loud on Wednesday night, calling the influx of immigrants into the United States via the southern border “the great replacement.” This idea was first floated as a conspiracy theory by a far-right French author who claimed Europe’s White population was being replaced by non-Whites as part of a plot by elites.

“Nothing about it is an accident, obviously,” Carlson said of the border crisis. “It’s intentional. Joe Biden did it on purpose. But why? Why would a president do this to his own country? What Joe Biden is doing now will change this country forever. So again, why is he doing it? There’s only one plausible answer.”

Tucker Carlson Goes All In On ‘The Great Replacement’ Theory, Says Biden Wants To ‘Change the Racial Mix Of the Country’https://t.co/pv7sXifmTj

The country is getting less white. By the day. That’s just a fact. Republicans had a choice. They could either 1) complain about it and try to keep brown & black people out, or 2) they could try to convince a “less white” America to vote for them. They chose #1.👇 https://t.co/vHkUw5h1kd

No, Tucker, it’s in in neo-Nazi circles that this policy is called the ‘great replacement.’ That’s the rhetoric you’re using. Neo-Nazi rhetoric on primetime cable. And it’s going to get (more) people killed. https://t.co/tetEdhgQAh