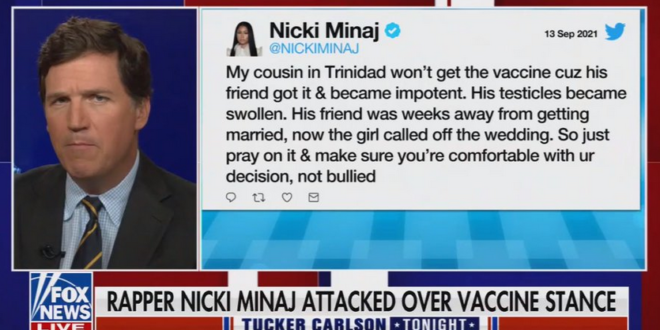 Tucker Carlson took a moment during his Monday night show to tout Nicki Minaj’s comments about the covid-19 vaccines.

Carlson started off by remarking, “So Nicki Minaj is a huge rap artist. Not sure there’s much overlap between her audience and this one, but our producers assure us she’s one of the biggest in the world.”

He then proceeded to read aloud her tweet about doing more research and her tweet claiming that a friend of her cousin’s got swollen testicles after being vaccinated. There is no evidence this is a side effect of the vaccines.

“My best friend’s sister’s boyfriend’s brother’s girlfriend heard from this guy who knows this kid who’s going with the girl who saw Ferris pass out at 31 Flavors last night. I guess it’s pretty serious. ” https://t.co/PN7U82YPvv

They want you to get vaccinated for the Met. if I get vaccinated it won’t for the Met. It’ll be once I feel I’ve done enough research. I’m working on that now. In the meantime my loves, be safe. Wear the mask with 2 strings that grips your head & face. Not that loose one 🙏♥️

I know babe. A lot of countries won’t let ppl work w/o the vaccine. I’d def recommend they get the vaccine. They have to feed their families. I’m sure I’ll b vaccinated as well cuz I have to go on tour, etc. https://t.co/7SK5Df0yBf

Previous Israeli Anti-Vax Movement Leader Dies Of Something
Next Huckabee: Anti-Vaxxers Exist Because Biden Is Boring