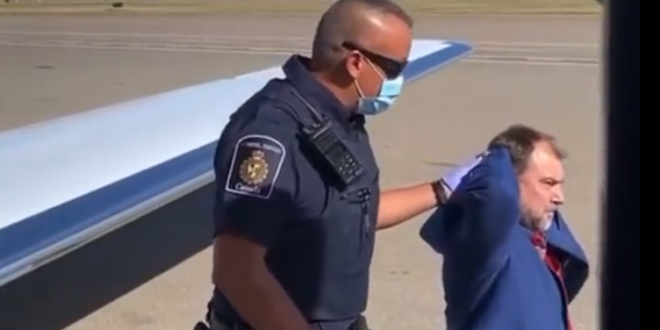 Controversial pastor Artur Pawlowski was arrested on the tarmac at the Calgary International Airport on Monday afternoon. Artur’s lawyer Sarah Miller confirmed her client was taken into custody and charged with contempt of court for an alleged offence on June 5, Artur and his brother Dawid Pawlowski were arrested in May for organizing an illegal gathering as well as promoting and attending an illegal gathering. They held church services that flouted rules on masking and physical distancing.

Read the full article. Artur Pawloski last appeared on JMG when he was first arrested for defying COVID laws. Pawlowski is fond of blaming natural disasters on God’s anger over LGBT civil rights. He first appeared on JMG way back in 2010 when Canada revoked his then-church’s tax-exempt status for violating laws on political activities by churches. As noted below, Pawlowski has become a cause célèbre on right wing media.

Pastor Artur Pawlowski was arrested today at the airport in Calgary, after he returned from a 4 month tour of the US, where he was a darling of MAGA media. He spent every day in the US spreading lies and vaccine conspiracies on TV and speeches around the US. pic.twitter.com/9lWcKNrAJh

He has repeatedly violated court orders. Here he is two weeks ago with Eric Trump. pic.twitter.com/IjTxe6zE3z

Of course, he also made several appearances on Fox. pic.twitter.com/vs2pPXQIF5

Previous Hannity: US Should “Charge People” For Citizenship
Next BOOK: Trump’s Mystery 2019 Hospital Visit Was For Colonoscopy, He Didn’t Want To Be “Butt” Of TV Jokes