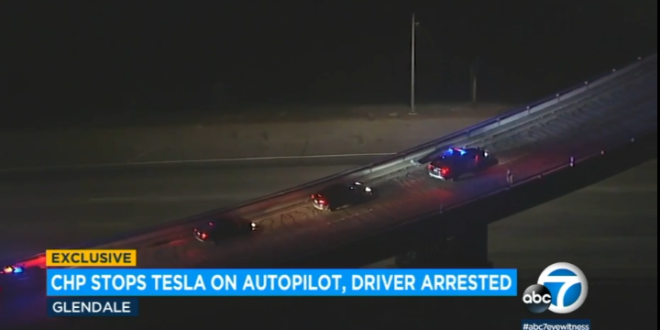 A DUI suspect was taken into custody after her Tesla vehicle that was reportedly on Autopilot stopped on a freeway overpass in the Glendale area Thursday night. According to a California Highway Patrol incident log, the vehicle hit a roadside wall shortly after 11 p.m. and kept traveling as the driver was reportedly unconscious.

In radio transmissions of the incident that were later obtained by ABC7, a dispatcher is heard saying: “The reporting party is advising that his wife is unconscious in a Tesla. The vehicle is driving itself. “It ended up TC’ing into the right shoulder wall, and, uh, still continuing,” the dispatcher says, using shorthand for a traffic collision.

Autopilot has frequently been misused by Tesla drivers, who have been caught driving drunk or even riding in the back seat while a car rolled down a California highway.

Exclusive video: Tesla on autopilot speeds down 134 Freeway with unconscious driver behind the wheel. How CHP stops the car now on ABC7https://t.co/QvUkDtW44Y

Previous CHATTER AWAY: Overnight Open Thread
Next Victims Of Military Anti-LGBT Bias To Get Full Benefits