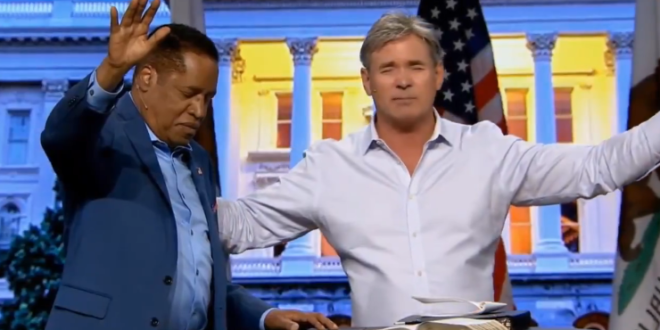 At evangelical churches across California, this Sunday’s services were no different than those taking place over the past few months when it comes to emphasizing the importance that congregants vote in the state’s upcoming recall election.

In the case of Tuesday’s special election, that means pastors not only preaching but also having ballots on hand and making pleas for members of their congregations to get out to vote in support of front-running Republican candidate Larry Elder.

Calvary Chapel Chino Hills Pastor Jack Hibbs reminded his congregation of 15,000 to turn in their ballots for collection and emphasized how crucial each and every individual’s vote was. Hibbs estimated that prior to Sunday’s service, his church—which has a large online and social media presence—had collected 20,000 ballots.

“We could have a man that is a native Californian who came through the ranks to represent our state,” Calvary Chapel Chino Hills Pastor Jack Hibbs said of GOP candidate Larry Elder. https://t.co/YFgxOiuvuh

A guy in a new Larry Elder California recall ad is really working through some stuff. He says Gavin Newsom reminds “me of the guy in high school who took my girlfriend, then went on to the next girl” (Ad captured by our friends at @Ad_Impact) pic.twitter.com/HQABdDuxIh

Woji; @larryelder⁩ “accused by former fiancé of abuse. During argument, said he brandished a gun. Caitlyn Jenner called for Elder to withdraw from race.” Said Women’s Marchers were “obese & unattractive.” Said PMS stands for “Punish My Spouse”
Yeah, no, not psycho at all. Lol pic.twitter.com/MSxQkMEJ2t

📣 Larry Elder believes companies *SHOULD* be allowed to hire and fire based on “race, color, or creed,” and suggests the market will punish companies for racist hiring practices. pic.twitter.com/qTJK3viw9X

BREAKING: Larry Elder called for SLAVE OWNERS to get reparations in newly unearthed footage by @RzstProgramming. Share this everywhere and remember to VOTE NO on the recall! pic.twitter.com/mdyH68jc8m

After saying last week that Biden “won the election fairly and squarely,” Elder is now claiming that the election was “extremely unfair.” pic.twitter.com/5lo7YGwpg4

Hibbs closed out the service/campaign event by literally seeking donations for Elder’s campaign before laying hands on him and praying that God would make him “invincible.” pic.twitter.com/15HuqhfO6C

Previous Adam Kinzinger: Biden’s Vax Mandates Will Save Lives, Some Republicans Are Just “Playing On People’s Fears”
Next 59% Of Republicans: Saying Trump Won Is Important