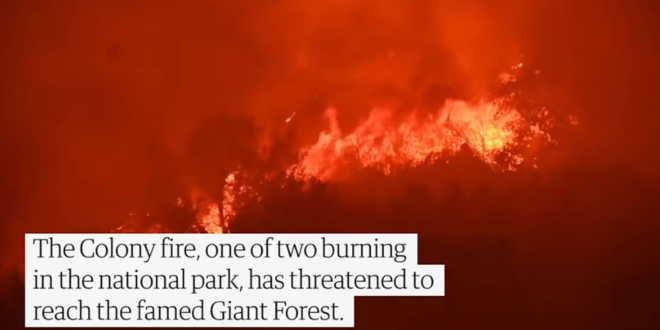 As the growing KNP Complex fire continues its march through Sequoia National Park, fire crews on Thursday were prepping the famed Giant Forest for flames by wrapping some of the massive sequoias in fire-resistant aluminum material.

The Colony fire — one of two blazes making up the more than 9,000-acre complex fire — is within a mile of the grove, and officials fear the flames could reach the giant trees within the day. The grove is home to roughly 2,000 giant sequoias, including the 275-foot General Sherman Tree, considered the largest tree on Earth by volume, fire officials said.

“It’s a very significant area for many, many people, so a lot of special effort is going into protecting this grove,” said Rebecca Paterson, a spokeswoman for Sequoia and Kings Canyon National Parks.

The Biggest Tree in the World, the General Sherman, raked and wrapped in preparation for the incoming #KNPComplex fire. Sequoia National Park pic.twitter.com/EpVkaYvimE

Wildfires are burning dangerously close to the famed Giant Forest. It is the home of the General Sherman tree, considered the largest living thing on Earth.https://t.co/IBolHU1PN9