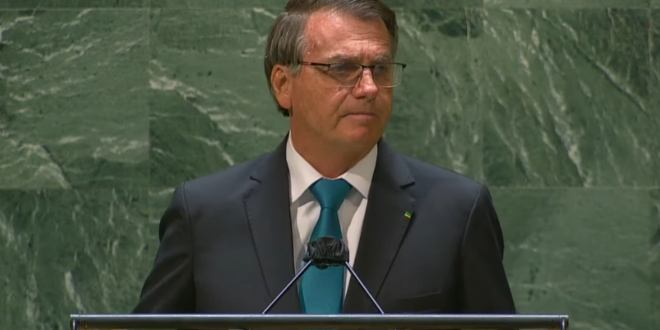 President Jair Bolsonaro of Brazil kicked off the United Nations General Assembly on Tuesday by defending the use of ineffective drugs to treat the coronavirus and by pushing back on criticism of his government’s environmental record.

Brazil’s far-right president said doctors should have had more leeway in administering untested medications for Covid-19, adding that he had been among those who recovered after “off label” treatment with an anti-malaria pill that studies have found ineffective to treat the disease.

“History and science will hold everyone accountable,” said Mr. Bolsonaro, whose handling of the pandemic in South America’s largest country has been widely criticized. Mr. Bolsonaro’s decision to not get vaccinated against the coronavirus has loomed large over his first couple of days in New York.

Brazilian President Jair Bolsonaro was the first world leader to speak at the United Nations General Assembly on Tuesday, creating a defiantly awkward opener for an event expected to focus largely on the global response to the covid-19 pandemic.

Bolsonaro has been accused of stoking anti-vaccine sentiment and says he does not need to get vaccinated because he recovered from a mild case of covid-19 last year.

While he devoted only a small part of his address to the pandemic, his presence at the assembly spoke volumes on it: As he has not been fully immunized, Bolsonaro appears to have broken U.N. rules that asked for all those who entered the general assembly hall to be fully vaccinated under an “honor system.”

Unvaccinated heads of state attending the United Nations General Assembly this week like Brazil’s President Jair #Bolsonaro may have to settle for a slice of pizza on a sidewalk instead of fine dining at New York’s restaurants.#UNGAhttps://t.co/5eeT4N7hZ0

The unvaccinated @jairbolsonaro was playing to his base at the @UN GA, reports @ShastaReports – He’s “proud” of his government’s response to the pandemic but criticized vaccine mandates and defended early treatment for the virus, what frequently means using hydroxychloroquine. pic.twitter.com/jqaVwijhxT

This morning, as delegations arrived at the @UN headquarters in New York City for the #UNGA activists took to the streets protesting Brazil’s President Bolsonaro. Protesters walked back and forth different access to the UN building chanting “Bolsonaro Genocide Criminal” pic.twitter.com/psTqhNIlJf

Previous Florida Restaurant Owner To Defy Federal Vax Mandate Because “I Believe God Told Me Not To Take This Vax”
Next FBI: Newly Arrested Riot Suspect Pushed Capitol Cop Down Stairs, Yelled “These Motherfuckers Are Traitors”