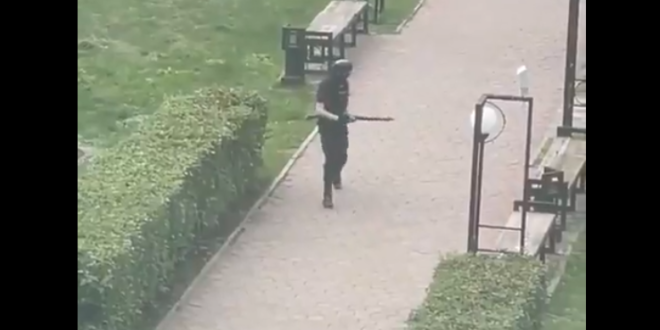 A gunman opened fire on a Russian university campus on Monday killing at least six people, investigators said, in the country’s second mass shooting this year to target students. Videos circulating on social media showed people throwing belongings from windows of university buildings in the central city of Perm before jumping to flee the shooter.

State media broadcast amateur footage reportedly taken during the attack showing an individual dressed in black tactical clothing, including a helmet, carrying a weapon and walking through the campus.

In a statement carried by Russian news agencies, the health ministry said 24 people were receiving treatment, including 19 who had received gunshot wounds. The health ministry declined to comment when reached by AFP.

A gunman in black tactical clothing and a helmet walked through campus while shooting a legally purchased hunting rifle. This is the second mass shooting at a Russian school this year, and the fourth in four years. At least one was influenced by Columbine. https://t.co/FJ2AGt9QpM

RAW: A student opened fire on a university campus in central Russia, killing at least eight people, in the second mass shooting at an education facility this year https://t.co/CQkMnDlV2M pic.twitter.com/uCEzIbJ4gq