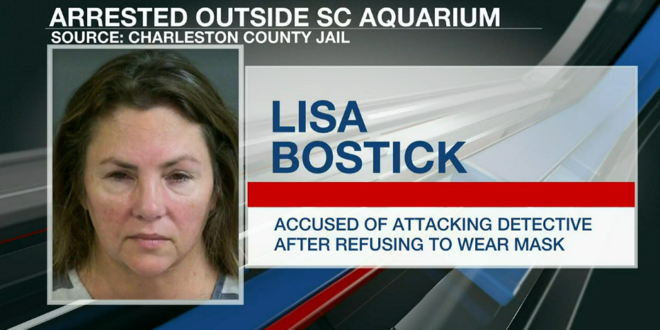 Officials with the Charleston Police Department say a loaded gun was found on a 56-year-old woman who went to the SC Aquarium and attacked a police detective after she refused to wear a mask. Lisa Bostick was charged with simple assault, disorderly conduct, and unlawful carrying of a weapon. She was given a $26,319 bond.

According to CPD officials, at that time, Bostick became belligerent and approached the detective in an “aggressive manner” including waving her hands violently in his face. The detective reported that when he went to place her under arrest for disorderly conduct, Bostick struck him in the neck and chest area.

A woman visiting the South Carolina Aquarium told staff to “fuck themselves” when they asked to pull her mask up. She then became belligerent toward an officer who tried to detain her, and admitted she had a concealed, loaded handgun with her. #scpol https://t.co/FRwr0zpdEm