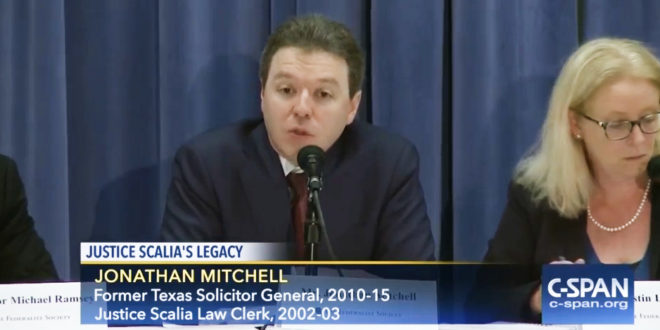 In the same brief, which calls for Roe to be overturned, Mitchell and co-counsel Adam Mortara, an anti-abortion activist and lawyer who clerked for the Supreme Court justice Clarence Thomas, said such a decision could open the door for other “lawless” rights and protections to be reversed, including the right to have gay sex and the right to same-sex marriage.

The lawyers argued that while it was not necessary for the high court to immediately overrule the legal cases that enshrine those rights, “neither should the court hesitate to write an opinion that leaves those decisions hanging by a thread”.

Those cases (Lawrence, which outlawed criminal sanctions against people who engaged in gay sex, and Obergefell, which legalized same-sex marriage) were “far less hazardous to human life”, they said, but just “as lawless as Roe”.

FYI: In the SCOTUS challenge to MS’s 15-week abortion ban, Jonathan Mitchell, the architect of TX’s SB 8, has filed an amicus brief on behalf of TX Right to Life. The brief invites the Court to overrule Roe & Casey AND Lawrence & Obergefell, 2 major LGBTQ equality decisions. pic.twitter.com/sVREiCNZrl

So the focus here is on Roe & Casey … for now. The long-term plan is to overturn all of these decisions.

Here’s a link to the brief in full: https://t.co/ckFayCtSdh

This is an obviously absurd interpretation. Under Mitchell’s logic, the same case could be made for overturning Loving v. Virginia which goes to highlight the absurdity.

Loving is also mentioned in this brief!