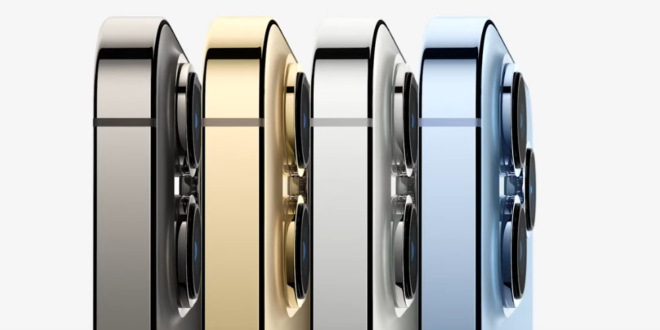 The ‌iPhone 13‌ Pro and ‌iPhone 13‌ Pro Max come in the same 6.1 and 6.7-inch display sizes as the iPhone 12 Pro and iPhone 12 Pro Max. The new devices feature a 20 percent smaller notch for more display area, a brighter Super Retina XDR display, and ProMotion for refresh rates from 10Hz to 120Hz.

Apple says that despite the faster chip, 5G, better cameras and other features, the iPhone 13 has longer battery life than its predecessor. One way it does this is by shifting to LTE “when 5G speeds aren’t needed,” Apple said. And the company’s A15 Bionic chip is more efficient, Apple said.

Apple is also getting its device to rely on the internet less. Many Siri requests for example will stay on the device, a first in the 10 years since the voice assistant was first introduced.

Apple said it’s keeping prices the same this year. iPhone 13 Mini starts at $699, with double the starting capacity to 128GB. (You can also get a 512GB version now, which used to only be available on the Pro models.)

Apple’s new iPad Mini has an all-new design that resembles the iPad Air that was released in 2020. The new Mini has an 8.3-inch screen, a Touch ID sensor on the power button, a USB-C port, a 12MP ultrawide front camera that supports Apple’s Center Stage technology, and the option of 5G connectivity.

It also supports the second-generation Apple Pencil, which can connect magnetically to the side of the tablet. The new tablet starts at $499. It will be available to order Tuesday ahead of availability on September 24th.