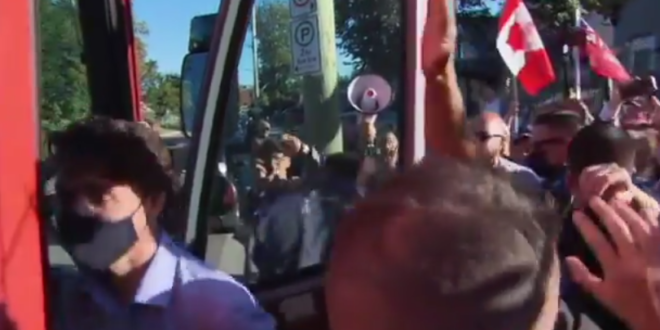 Liberal Leader Justin Trudeau was hit by some gravel Monday while boarding a campaign bus in London, Ont. As Trudeau went to get on the bus, which was surrounded by angry protesters, small objects could be seen thrown in his direction. A masked Trudeau looked startled before he went into the vehicle.

Trudeau later confirmed to reporters on the campaign plane that he was hit by gravel but said he is okay. Conservative Leader Erin O’Toole sent a Twitter message calling the incident “disgusting” and condemned the actions “in the strongest terms possible.”

It was the latest ugly scene in a 36-day federal election campaign that has not been short of them. Vandals have defaced candidate lawn signs with antisemitic graffiti. Candidates of all political stripes have reported being targeted with sexist and racist slurs.

Trudeau last month called a snap federal election for Sept. 20, betting that his handling of the public health and economic crises wrought by the pandemic would help him to regain a majority in the House of Commons. With under two weeks before the vote, his Liberals are running neck-and-neck with the Conservatives.

“Trudeau must go.” “Lock him up.” “Freedom.” – are some of the shouts outside the venue where @JustinTrudeau is making an appearance in #ldnont #elxn44 pic.twitter.com/ULxwEWFsNP

This is disgusting and I condemn these actions in the strongest terms possible. Political violence is never justified and our media must be free from intimidation, harassment, and violence. https://t.co/xF3TaWXSvI

Anti-vaccine protesters aren’t renowned for having reasoned arguments—but chucking rocks at people is a bit much even for them https://t.co/snOOXw60Q5

WHO ARE THEY? These two are allegedly the ones who threw rocks at Prime Minister Trudeau in London Ontario.

Please Retweet & DM me if you know the identity of these two. #Elxn44 #London pic.twitter.com/9By6CdF9S3

Previous Chance Of Breakthrough Infection: About One In 5000
Next Ex-FBI Director Warns Of Coming Rally For Rioters