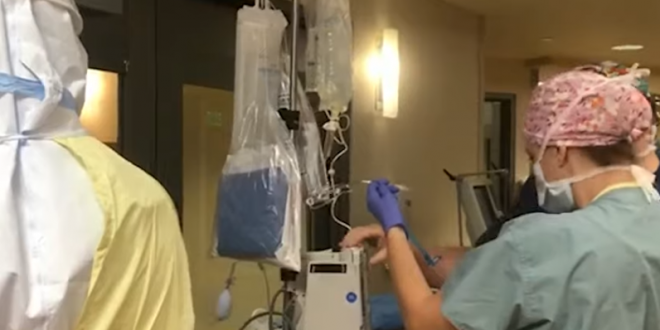 Anti-vaccine Facebook groups have a new message for their community members: Don’t go to the emergency room, and get your loved ones out of intensive care units.

Consumed by conspiracy theories claiming that doctors are preventing unvaccinated patients from receiving miracle cures or are even killing them on purpose, some people in anti-vaccine and pro-ivermectin Facebook groups are telling those with Covid-19 to stay away from hospitals and instead try increasingly dangerous at-home treatments, according to posts seen by NBC News over the past few weeks.

Conspiracy theory influencers on the encrypted messaging app Telegram have offered instructions on how to get family members released from the hospital, usually by insisting they be transferred into hospice care, and have recorded those they’ve successfully removed from hospitals for viral videos.

Read the full article. So much crazy.

⁰It’s hard to explain just how radicalized ivermectin and antivax Facebook groups have become in the last few weeks.

They’re now telling people who get COVID to avoid the ICU and treat themselves, often by nebulizing hydrogen peroxide.

So, how did we get here?

So in the last couple of months, Ivermectin groups have become the new hubs for antivaxx messaging.

But there’s a problem: Ivermectin, by itself, isn’t working.

The number of people in these ivermectin groups have exploded.

So has the number of people in the groups who have contracted COVID, since the groups are largely filled with unvaccinated people seeking “alternative therapies.”

So they developed a makeshift “protocol.”

Anything but the vaccine. pic.twitter.com/66ArbDcBXO

As they’re home self-medicating, antivaxxers are furious that friends and family won’t be administered ivermectin at the hospital.

So they’ve developed directions on how to get loved ones out of ICUs: put them in hospice care, then get them the miracle cures from YouTube.

They’ve developed elaborate conspiracy theories about doctors and nurses in the process.

They believe ventilators and remdesivir are secretly drowning patients’ lungs, not COVID itself.

Ivermectin Facebook is a wildly dark scene, an inverted reality where medical consensus is an elaborate conspiracy to kill you and random people on Facebook have the secret cure.

As Dr. Aditi Nerurkar tells me, “They’re starting to target the messengers—nurses and doctors.”

Here’s the full story about “vigilante medicine” on ivermectin Facebook.

Antivaxxers are starting to wrap doctors and ICUs into their dark conspiracy theories, as they suffer at home with ad-hoc COVID treatments that don’t work.

I hope you read it.https://t.co/pgghH6WrBu