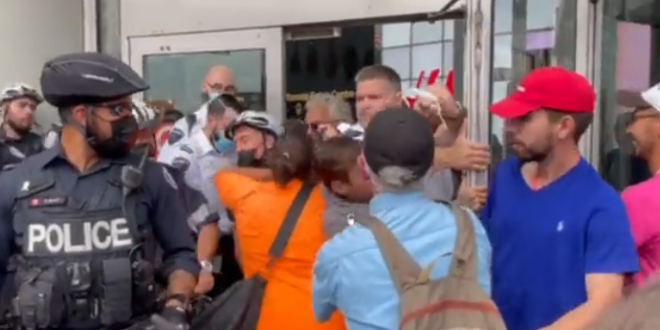 Two people have been arrested following an anti-vaccine, anti-mask protest outside the Eaton Centre on Saturday. Police say a group of protesters attempted to enter the mall but were denied access by security guards.

A video posted to social media by lawyer Caryma Sa’d shows the mob trying to forcibly push its way into the mall, scuffling with security and police officers while shouting “freedom.”

At one point in the video, a protester is heard telling the group over a megaphone that “there’s multiple entrances” and that they should “back off from the police.” Michael Leaf, 29, of Thornhill and Vanessa Carvalho, 23, of Brampton were both arrested and charged with assault.

Two people have been arrested following a violent anti-mask, anti-vaccine protest outside the Eaton Centre on Saturday. https://t.co/vLlBYlBew3

What we saw outside the Eaton Centre on Saturday is illegal behaviour and police are treating it as such – two people have been arrested and charged already. I know the vast majority of people are angered and frustrated by these anti-vaccine, anti-mask protests – I am too. pic.twitter.com/ZJMxOXayCH

There’s a guy filming himself walking around the Eaton Centre without a mask on, like its the most impressive thing he’s ever done.

…which it probably is. It’s just sad, the whole lot of it. Fragile, mediocre dudes addicted to social media likes from other mediocre dudes.

the anti-vaxers that are terrorizing eaton centre are calling it a fight against medical apartheid but give no response to the fact that it’s the unvaccinated filling up ICUs in Canada and that every single health worker will continue to give them all the care/all they have.

In case there was any confusion about whether Chris Sky incited #antivaxxers to storm the Eaton Centre, here’s a few guys telling him their plan to do exactly that.

Throughout his speech, Sky called Canadian men as “bitches” & “pussies” for their supposed complacency.#cdnpoli pic.twitter.com/7aVsqJcSXx