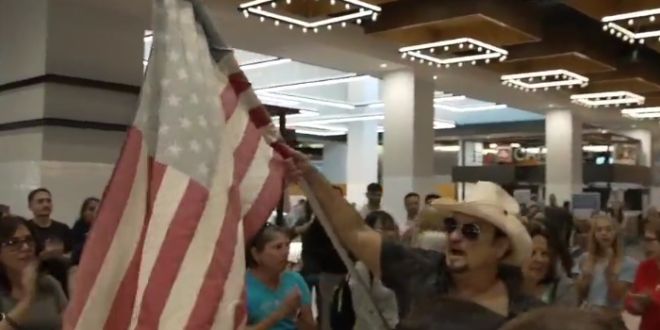 Amid the city’s vaccine mandate for indoor dining areas, several dozen demonstrators barged into the food court at the Staten Island Mall on Saturday chanting “USA” and anti-mandate slogans. The scene unfolded when a crowd of people stormed into the Food District section of the mall, an area which is supposed to be only for those who can show proof of vaccination. Demonstrators can be seen chanting “my body, my choice,” and reciting the Pledge of Allegiance.

A bunch of them were chanting “USA, USA” … and some even appeared to be wearing QAnon shirts. Eventually, one guy took the lead and told everyone what they oughta do next now that they’d broken through — apparently past security — and had their run of the place. He essentially said … go order something and sit down to eat. And, sure enough, it seems everyone started to do just that. At one point, the group of about 60 protesters or so started a new chant … “Fuck Joe Biden” — this as bewildered spectators looked on.

Still waiting for the deeply-researched/reported treatise on attitudes toward swearing in public over the last couple decades. Like, did I grow up in an unrepresentative place or would it have been considered WAY inappropriate to chant “f*** (person)” in a food court in the 90s? https://t.co/5T2FFpfDVk

As a citizen of New York City, I would just like to make it clear to the rest of the country that we do not recognize Staten Island as a legitimate borough. https://t.co/XP7MF4V18G