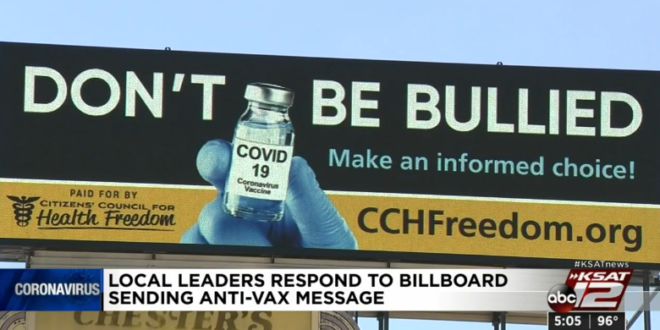 A new billboard campaign against vaccination mandates is running nationwide, and San Antonio is one of the targeted cities. The group behind it is from Minnesota. They say their goal is to raise awareness and build resistance to the new vaccination rules.

The digital billboard campaign is simple and straightforward: “Don’t Be Bullied. Make an Informed Choice.” Citizens’ Council for Health Freedom (CCHF), the Minnesota organization behind the message, says their intent is to support people who are being bullied for refusing to take the shot.

KENS 5 brought the campaign to the attention of local leaders at Thursday evening’s city and county coronavirus briefing. Mayor Ron Nirenberg said he is not aware of anyone who feels like they are being bullied by pro-vaccination efforts.

Read the full article. According to the video report linked above, the billboard is running in eight Texas cities and in at least four other states.

‘Don’t Be Bullied’ anti-vax mandate billboards have landed in Houston along I-45 https://t.co/D9A0ALjmrq