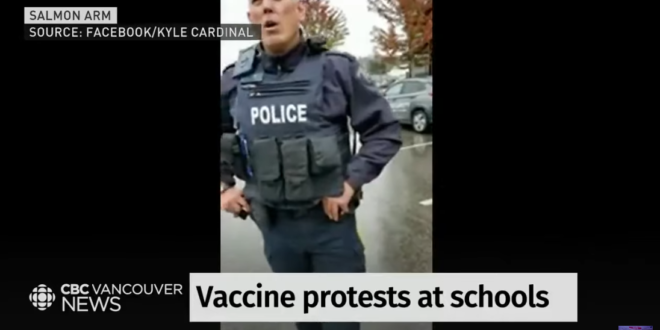 A school district in the Canadian province of British Columbia will be locking down schools starting Monday due to ongoing anti-vaccine protests, the district said late on Friday.

The “hold and secure” protocol was enacted on Friday after people protesting vaccines and masks, who the district said had been targeting schools all week, entered two school buildings in and around Salmon Arm, British Columbia.

The protocol meant that students could not leave or enter the building for the rest of the day. All schools in the district, a town of less than 20,000 people located roughly 450 kilometers (280 miles) northeast of Vancouver, will be under the same “hold and secure” starting Monday.

A mom whose Grade 12 daughter was locked in her Salmon Arm classroom after anti-vaccine demonstrators entered her school Friday says the group should be ashamed of themselves https://t.co/nYJQcfQfRN pic.twitter.com/MPhMcm8dYw

A school district in B.C.’s Southern Interior says all schools in its zone will be in lockdown mode starting Monday after COVID vaccine protesters entered three schools on Friday.https://t.co/HdLRHgxz8K