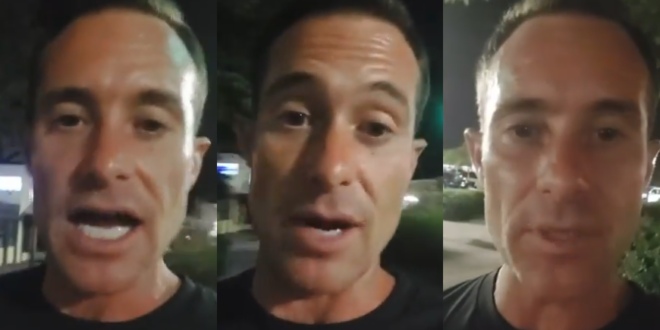 The Poway Unified Board of Education ended its Thursday meeting early after a group of people protesting mask-wearing mandates interrupted the proceedings, officials said. The board was expected to discuss its safety protocols and public health guidance updates. They never got to those items.

According to a statement issued by the board Thursday evening, a small group forced its way into the district office, pushing past staff members, and refused to leave.

According to witnesses, there were around 25 protesters outside the school district offices in Carmel Mountain Ranch. They were carrying signs that read, “Let Them Breathe, unmask our kids,” “Recall Gavin Newsom” and “Critical Race Theory teaches hate, racism, division.”

In a video posted to Twitter by the Activated Podcast and highlighted by Voice of San Diego editor in chief Scott Lewis, a man identified as Derek Greco claims he and fellow anti-mask activist are now the acting school board — and he is its president –for the city of Poway.

Lewis wrote, “the group that stormed Poway’s school board meeting pretended to have become the new real school board and cheered their new jobs.”

In the video posted by Greco, he claims the board abandoned their jobs, his group brought along a “constitutionalist” who gave them a thumbs-up to vote themselves into the jobs since they had a quorum.

And video from @TheActivatedPod reveals the group that stormed Poway’s school board meeting pretended to have become the new real school board and cheered their new jobs. https://t.co/e2H55oBTk6

The guy who thinks he’s the new Poway school board president. How long until these delusional people get violent? https://t.co/tWGTkp2CG9

San Diego anti-mask group Let Them Breathe were so disruptive yesterday that they shut down the Poway Unified School District Board meeting.

The SD County Sheriff deputies didn’t kick the anti-maskers out, they had the board themselves leave. pic.twitter.com/xZ3JVF9g8C

Since local media isn’t going to properly cover the group, more on Let Them Breathe in quoted tweet.

The group has raised over $126,000 from their GoFundMe alone and was responsible for 92+ anti-mask protests in California in August 2021. https://t.co/8fRadAeaph

Derek Greco (also seen in quoted tweet) claims they entered the Poway School Board meeting last night as a group, held a quorum, and elected new board members.

“This is taxation without representation, this is how the American revolution started the first time.” https://t.co/hORifCNaJ7 pic.twitter.com/3E4iuFrFWc

Previous DeSantis: Biden Is Having A “Hissy Fit” Over Vaccines
Next Boston Archdiocese Finds Priest Guilty Of Child Sex Abuse, Assigns Him To A “Life Of Prayer And Penance”