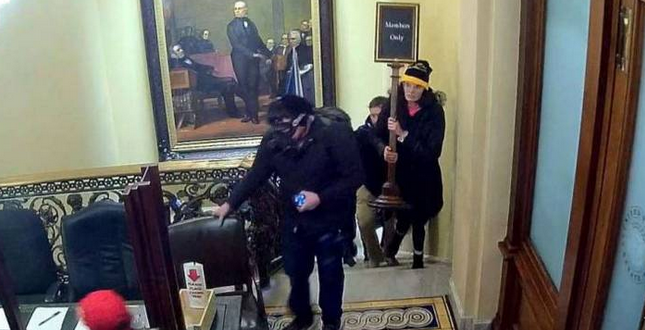 Woman Pleads Guilty In Riot, Boasted “Infamy Is As Good As Fame, Either Way I End Up More Well Known”

Courtright, who is from West Virginia, will be sentenced Nov. 16. She could face up to six months in prison in addition to other fines and restitution. “At approximately 3:01 p.m., surveillance footage showed Courtright walking up the steps near the Senate chambers carrying a “Members Only” sign,” according to plea deal documents.

Gracyn Dawn Courtright, who was a UK student when she entered the Capitol on Jan. 6, could face a prison sentence after pleading guilty. #uky #CapitolRiot #Kentucky https://t.co/k1IG4XLlSN

*Gracyn Dawn Courtright, a mathematical economics major at Univ. of Kentucky, faces 4 Federal charges in Capitol riot.
*She posted videos from the front of the mob that clashed with security.
*She wrote: “Nobody is being violent !!!!! (From what I saw).” https://t.co/ZWTB494Xnn pic.twitter.com/OAF6xHf06q

WATCH: Gracyn Dawn Courtright, a University of Kentucky student from Putnam County, leaves federal court in Charleston today after her initial appearance. She is charged in connection with the Jan. 6 riot at the U.S. Capitol and was released on bond. https://t.co/nMHerQ1keU pic.twitter.com/roPQNL3DoS