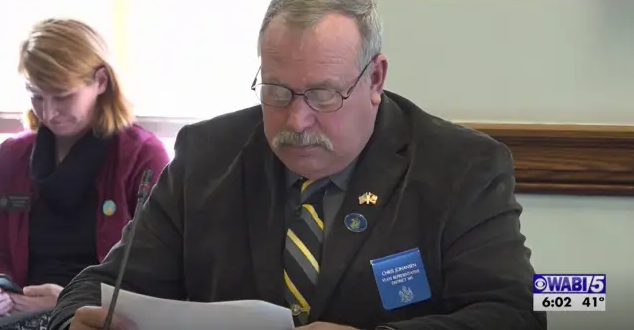 Wife Of Anti-Vax GOP State Rep Dies Of Something

But the headline is only the start of the story.

A Republican legislator in Maine who lost his wife to COVID-19 last week appeared at a rally on Tuesday that featured a GOP colleague who compared the state’s Democratic governor to a Nazi doctor who performed deadly experiments on Jews during the Holocaust.

State Rep. Chris Johansen, who emerged in the early days of the pandemic as a fierce opponent of public health-related restrictions, joined a group of lawmakers at the event in Augusta.

State Rep. Heidi Sampson delivered a speech to the crowd that baselessly accused Gov. Janet Mills, who has introduced a vaccine mandate for health-care workers, of operating a government campaign to test “experimental” vaccines on unknowing citizens.

Read the full article. Johansen has organized multiple lockdown protests outside the Maine Capitol and was stripped of his committee membership after leading an attempt to enter the state house without masks. The tweet below is from last month.

An #antivax anti-mask, Covid-denier #Maine State Rep and his wife both have contracted COVID-19. Chris Johansen (R-Monticello) was one of 7 GOP lawmakers who refused to wear masks during the 2021 leg session and subsequently lost their committee assignments. #mepolitics pic.twitter.com/YOctshEbuW