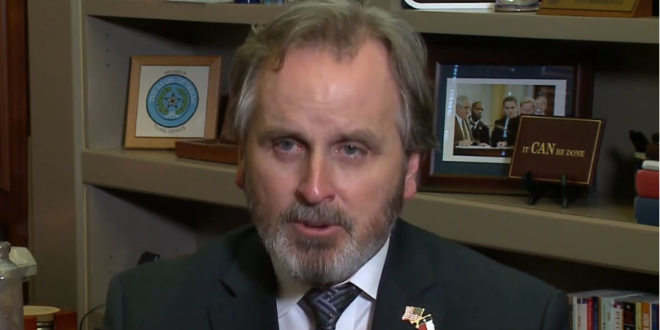 Three months after House Democrats first broke quorum to stymie a previous iteration of the legislation, Republicans in the House and Senate Tuesday signed off on the final version of Senate Bill 1 to further tighten the state’s voting rules and rein in local efforts to widen voting access. Abbott, a Republican, is expected to sign it into law.

The bill was delayed one more time as its Republican author, state Sen. Bryan Hughes [photo], disapproved of language added by the House to address the controversial conviction of Crystal Mason, a Tarrant County woman facing a five-year sentence for a ballot she has said she did not know she was ineligible to cast.

Hughes’ objection triggered backroom talks to strip the Mason amendment before the bill could come up for a final vote.

The bill takes aim in particular at Harris County, a growing Democratic bastion that includes Houston and is the nation’s third most populous county. The legislation forbids balloting methods that the county introduced last year to make voting easier during the pandemic, including drive-through polling places and 24-hour voting, as well as temporary voting locations.

It also bars election officials from sending voters unsolicited absentee ballot applications and from promoting the use of vote by mail. The bill greatly empowers partisan poll watchers, creates new criminal and civil penalties for poll workers and erects new barriers for those looking to help voters who need assistance, such as with translations. It requires large Texas counties — where Democrats perform better — to provide livestreaming video at ballot-counting locations.

Breaking News: The Republican-controlled Texas Legislature passed a major bill to tighten what were already some of the nation’s strictest voting rules, overcoming a six-week walkout by Democrats. Gov. Greg Abbott is expected to sign it. https://t.co/BBMFMeSok0