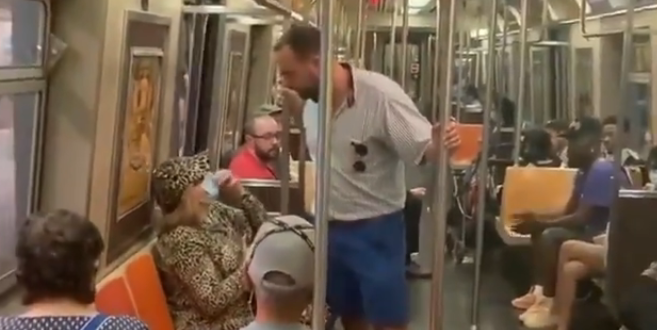 Ryan Bartels is a Virginia man who has been accused on social media of being the anti-masker who yelled “1776!” at a woman on a New York City subway on August 15, 2021, in a now-viral video. The incident occurred on the Q subway train in New York City. Officials with the NYPD and the MTA have not commented about whether an investigation into the incident is ongoing. According to the MTA, masks are required on subways in New York City.

The video that went viral showed a man yelling “1776!” at a woman on the subway. It was posted on Twitter and TikTok by a user who goes by Naviko and @Subway_DJ. The man was not wearing a mask, while the woman was. “I wish the police would come and give you a $50 fine” for not wearing a mask, the woman tells the man. The man then leans closer and says in a mocking tone in the woman’s face, “I’m so afraid!” He steps back after she says, “Please get away from me sir.”

Read the full article. Watch all the clips.

Yo! We need to find out who this guy is.
This happened yesterday on the Qtrain pic.twitter.com/3qJcH3Ag8Z

He has been identified as Ryan Bartels in @rx0rcist ‘s follow up. Appears he was (or still is) a @CarMax employeehttps://t.co/JJUAMmsdpH pic.twitter.com/BYeUJK3k03

UPDATED: We’ve been made aware of a concerning video. This individual has not worked for our company since May 2021. At CarMax, we value treating everyone with respect and this behavior does not represent our values.

i’m told this was after an antivax rally, so he likely attended that.

Ryan Bartels’ friend in the red shirt is Nicholas Sam.

Nick is a “Sportsbook Operations Specialist” for @DKSportsbook.

He deleted his facebook this afternoon, likely because Ryan — his UVA pal — was having a meltdown about getting “doxxed” (his name was tied to his actions). pic.twitter.com/dA3fXakkbQ

This is NOT ok. My journalist friends have been attacked on both coasts at these MAGA anti-vaxx rallies. I was leaving this event walking through the crowd and this guy yelled from behind, “Why are you wearing a mask?” when I turned around he did this. pic.twitter.com/VXVO0Rkrxn

Guy in your video looks a lot like the a$$hole on the subway. Notice the round sunglasses in his shirt pocket. pic.twitter.com/hwgAsybB3g

Here they are at the new republican club rally today in Nyc. Guy on left was his buddy on the train who laughed and looked along. Notice Pudge boy is throwing up proud boy gestures. I’ve also been told he may be a proud boy from some sources. pic.twitter.com/y253pIFWqK