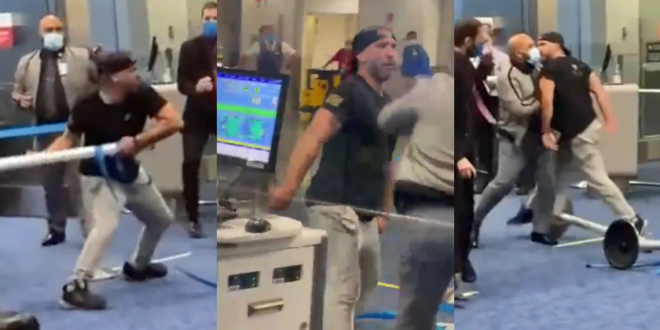 VIRAL VIDEO: Man Goes On Violent Rampage At Miami Airport After Being Denied Boarding For Being Drunk

A viral video shows a man going on a violent, racist rampage in Miami International Airport on Friday night, hurling obscenities and stanchions.

In the minute-long clip, posted to Twitter by user @ONLYinDADE on Saturday, the unmasked man is seen in a heated confrontation with an airport worker at a gate, while other passengers appear to be waiting for their flights.

He precedes to knock over and throw stanchions while shouting obscenities, including a racial slur. “Where’s the police?” a woman can be heard asking. “Oh my god. Oh my god.”

The man could be seen in the video trying to enter an American Airlines gate in Terminal D. In one video, the man is seen picking up a security post and swinging it at bystanders, including airport staff. Witnesses told Local 10 News they believe the man was intoxicated.

A Local 10 viewer said just before this confrontation, the man entered the women’s restroom near gate D23 and got into a physical altercation with his girlfriend. The viewer said the man was then denied boarding on the flight due to his aggressive and possibly intoxicated behavior.

Photos obtained by Local 10 News show what witnesses said is the man on a medical stretcher outside the airport, surrounded by officers. While the incident took place in Terminal D, authorities said they took the man into custody near the baggage claim.