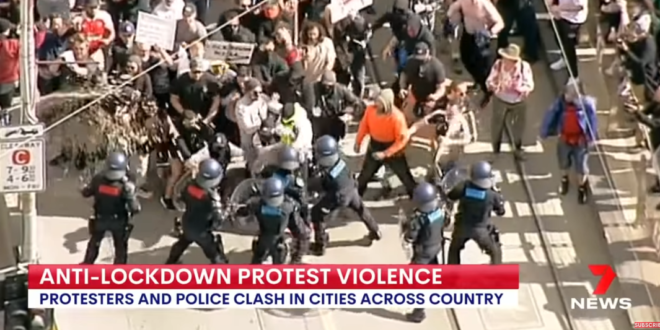 Australian police clashed with hundreds of anti-lockdown protesters in Melbourne and Sydney on Saturday as officials reported the country’s highest ever single-day rise in Covid-19 cases. Mounted police used pepper spray in Melbourne to break up crowds surging toward police lines, while smaller groups of protesters were prevented from congregating in Sydney by a large contingent of riot police.

Sydney, a city of more than 5 million people, has been in a strict lockdown for more than two months now, failing so far to contain an outbreak that has spread across internal borders and as far as neighboring New Zealand. The vast majority of the 894 cases reported across Australia on Saturday were found in Sydney, the epicenter of the Delta variant-fueled outbreak. Although often violent, anti-lockdown protests are not broadly supported by Australians.

More than 250 people who were protesting coronavirus lockdowns in Australia were arrested Saturday and many faced fines for defying health orders, authorities said.

At least seven police officers were treated for injuries after skirmishes broke out at some of the protests, which took place in multiple cities nationwide. The largest and most violent protest was in Melbourne. Many were organized by people in encrypted online chat groups.

In Melbourne, a crowd of about 4,000 mostly unmasked protesters let off flares, yelled and blasted music in the central city. Victoria state police arrested 218 people and issued more than 200 fines, each for more than 5,400 Australian dollars ($3,850).

These scenes in Melbourne are being actively encouraged by the Murdoch press. We won’t forget how much harder they’ve made this for all of us. pic.twitter.com/JoOboTSYPg

Melbourne 🇭🇲 Epic Scenes💥 I was there, I saw it all, Police were brutal, I got pushed within the first 2 minutes… This scene shows the moment the Peaceful Crowd pushed through heavy police lines. The moment The People realised, We Have the Numbers. Long Live the People 💥👊 pic.twitter.com/ckESnm80KZ