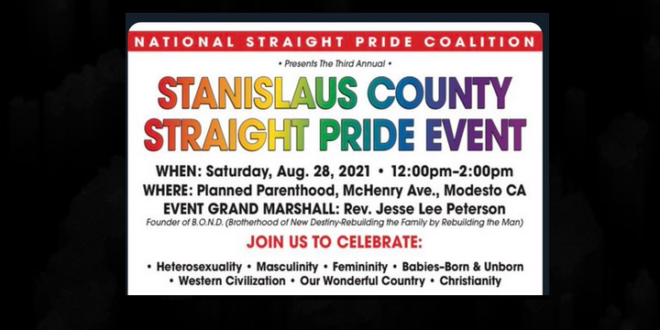 Modesto’s third straight pride rally was preceded Saturday morning with an anti-hate event and ended when a fight led to disbursement, road closures and two arrests. About 100 people gathered at 10 a.m. Saturday in Roosevelt Park for a Modesto Stands Against Hate event. It was put on by multiple organizations including MoPride and Stanislaus DSA to affirm the LGBTQ+ community and speak out against the Straight Pride Coalition.

Proud Boys, a conservative pastor and other extreme right-wing supporters stood in front of the building and nearby street corners while a small group of counter-protesters stood across the street from them. They stayed mostly away from each other for the first hour, but sometime after 1 p.m., the two sides clashed. Modesto Police was called to the scene where a fight had broken out and someone had sprayed bear spray, police spokesperson Sharon Bear said.

The “grand marshal” of the rally, once again, was far-right preacher Jesse Lee Peterson, who has recently argued that woman should not be educated or allowed to hold jobs. For my many previous posts about him, click here. Last year’s event was organized by local political gadfly and white nationalist Don Grundman. 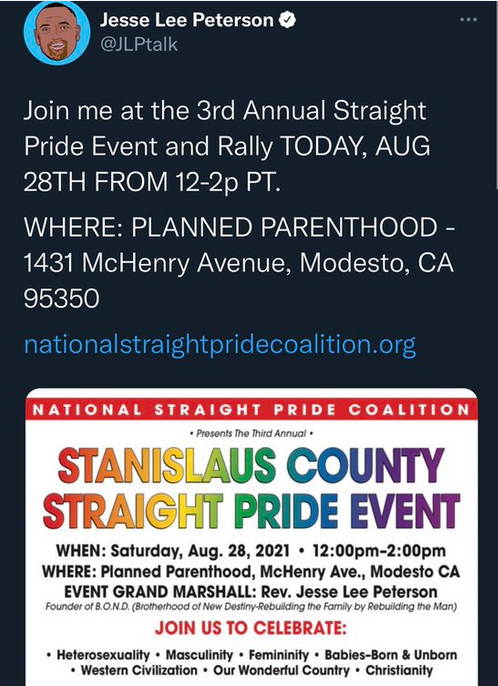 A man in USA flag gaitor appeared to throw the first punch. pic.twitter.com/9xkdHr7A9L

“I’m homeless, where do I go?” he asked the police as they pushed him back. pic.twitter.com/E9u6UbgRVK

As officers continued to push the group back, Proud Boy Jeffrey Perrine fell on his back, apparently having been pushed by officers.

Officers then arrested him. pic.twitter.com/KpErUP83ld

For context, Proud Boy Jeffrey Perrine, who appeared to be the only individual arrested yesterday without being let go on site, was formerly a member of the Sacramento County Republican Central Committee, but was expelled in February.https://t.co/Ib0i2jHVqN

This is State of Jefferson Proud Boy Cosmin Merca. Back in may, I documented his participation in a neo-nazi telegram channel. He’s also the one who ran around the CA Capitol grounds last December, waving a knife around in a Santa costume and plate carrier. pic.twitter.com/m6Z9Wjxeos

This is Proud Boy Jacob Ku. He’s been a regular at this kind of thing for years. pic.twitter.com/f8kjHKVm5m

Wherever groups like the Proud Boys go, violence follows them + in #Modesto, people directly connected to the GOP + the local police are giving them the space to grow and advance that violence. It’s up to all of us to come together and push back. pic.twitter.com/MQHqXxOFDq

This is Proud Boy Jeffrey Perrine making it very clear what Proud Boys are about after PBs had just assaulted several counter-demonstrators in Modesto today. “We’re Taking America Back” “Fuck the LGBT. Fuck ’em all” pic.twitter.com/0nylBmQCyZ