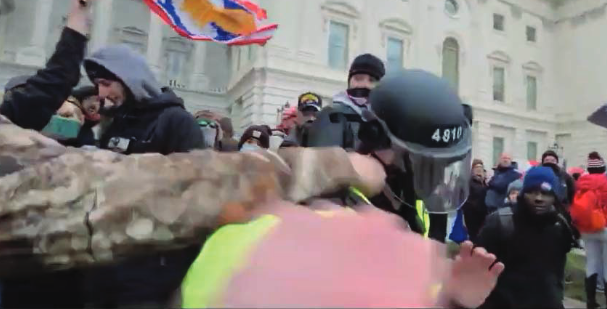 Seven months to the day after the Jan. 6th siege of the U.S. Capitol, federal prosecutors have announced their first two guilty pleas for individuals charged with assaulting police on that day.

They are a former MMA fighter Scott Kevin Fairlamb and a metal baton-swinging Seattle resident Devlyn Thompson, the government announced on Friday. Fairlamb agreed to being part of a large crowd that pushed through a line of police officers and metal barricades, and prosecutors say he, “unprovoked, shoved and punched an officer.”

Prosecutors quoted Thompson, 28, with similar taunts months later in July, claiming that he called police officers “traitors,” deployed bear spray on them, threw projectiles at them and swung a metal baton toward them.

Read the full article. The pair faces up to 20 years in federal prison but will likely be sentenced to around five years each.

A New Jersey gym owner has become the first person to plead guilty to assaulting a law enforcement officer during the Jan. 6 riot at the U.S. Capitol. Federal prosecutors say Scott Kevin Fairlamb was one of the very first rioters to breach the Capitol. https://t.co/4AKrq8tCpC

A Former MMA Fighter from N.J. and a Metal Baton-Swinging Seattle Resident Are the First to Plead Guilty to Assaulting Police on Jan. 6th https://t.co/u8zzRAhUt6 via @lawcrimenews

This is one of them: “former MMA fighter” Scott Kevin Fairlamb.

Background story from March, via @ColinKalmbacher.