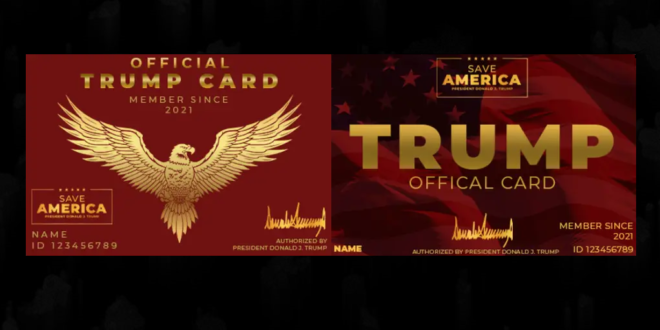 Donald Trump wants his supporters to carry “Trump Cards.” The Trump camp sent two emails on August 4 asking supporters to get on board with carrying the red and gold cards, which look like credit cards and bear the former president’s signature.

“The card you select will be carried by Patriots all around the Country. They will be a sign of your dedicated support to our movement to SAVE AMERICA, and I’m putting my full trust in you,” Trump wrote in the first email.

The Trump team sent a follow-up email later that night, which read: “We’re about to launch our Official Trump Cards, which will be reserved for President Trump’s STRONGEST supporters.”

Next will be arm bands https://t.co/R5FhyuSwkB

Previous Fox News Host: Leftists Hate You And Your Baby
Next Miller On ISIS Flooding GETTR: They Attack The MAGA Movement Because Trump Destroyed Them Militarily