Former President Donald Trump called being woke a “shortcut to losing everything we have” at a rally in Cullman, Alabama on Saturday.

“Do you think that General Patton was woke?” Trump asked the audience. “I don’t think he was too woke. I think he was the exact opposite.”

“You know what woke means? It means you’re a loser. Everything woke turns to shit. Okay, it’s true. It’s true. Look at what’s happening,” Trump said to large applause. The crowd then broke out in a “USA!” chant.

Trump is now selling $45 “Everything Woke Turns To Shit” t-shirts, which he promoted last night in one of his six or seven daily money beg text messages.

From a February 2020 report by The Hill:

Supporters of President Trump can now purchase “Woke” hats and “Black Voices for Trump” T-shirts from his campaign store as his team works to expand its outreach to black voters.

On the president’s official campaign website, visitors can find the T-shirts in unisex sizes selling at $25 a piece. The shirts, which the campaign notes on its site are “proudly Made in USA,” come in both white and black and bear the words, “Black Voices for Trump,” in contrasting black or white lettering.

“Proudly wear the official Black Voices for Trump Tee and show your support for our great President,” a message reads alongside the shirt on the page.

“It’s really important that we take this next step and really bring those voters into the party.” – @KatrinaPierson

It’s time to get #woke.https://t.co/ARIobWtiXG 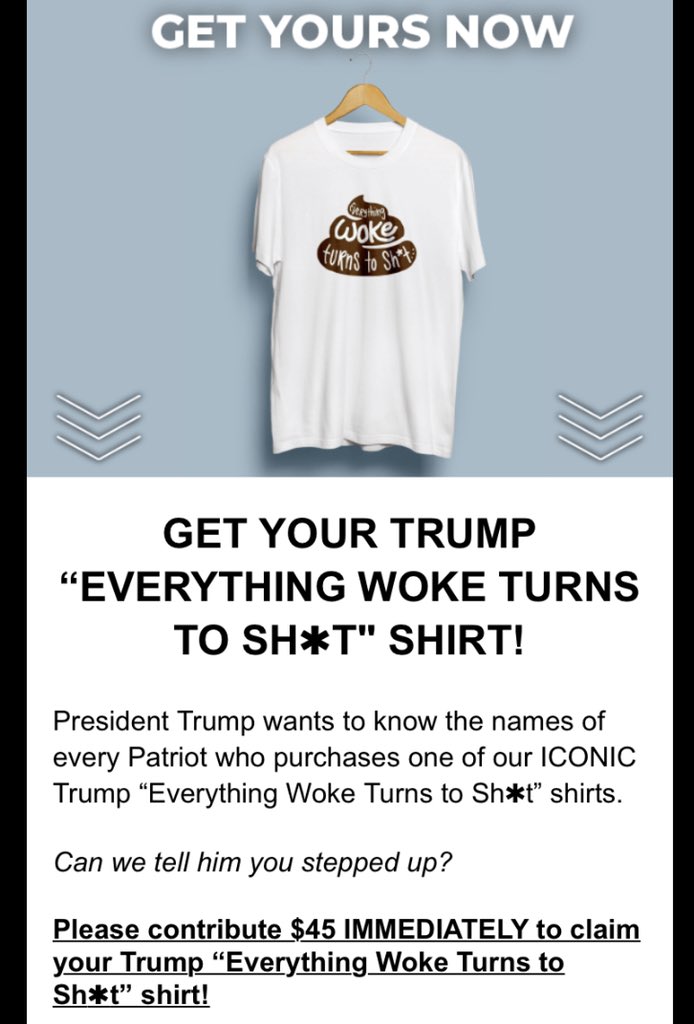 Previous STUDY: J&J Booster Produces 9X Antibody Response
Next War Profiteer Erik Prince Is Charging $6500 Per Person For Seats On His Chartered Planes Out Of Afghanistan