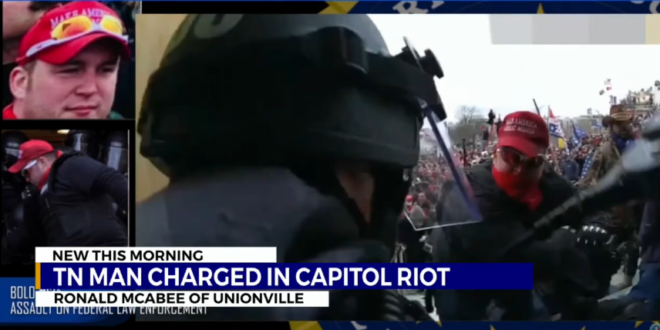 A 27-year-old man arrested in Nashville this week in connection to the January insurrection at the U.S. Capitol is a former Williamson County deputy, FOX 17 News has learned. An arrest warrant shows Ronald Colton McAbee was taken into custody on Aug. 17.

He faces the following charges: assaulting, resisting, or impeding certain officers inflicting bodily injury and aiding and abetting, civil disorder, entering and remaining in a restricted building or grounds with a deadly or dangerous weapon, act of physical violence in the Capitol grounds or buildings.

6 days ago I asked for #SeditionHunter firsts! This one is mine and today he was arrested #ThreePercentSheriff Ronald Colton McAbee! Tennessee man arrested for assaulting police officer in deadly U.S. Capitol riot https://t.co/m8tPjTXRd1 via @tennessean pic.twitter.com/nfmVYsDzjt