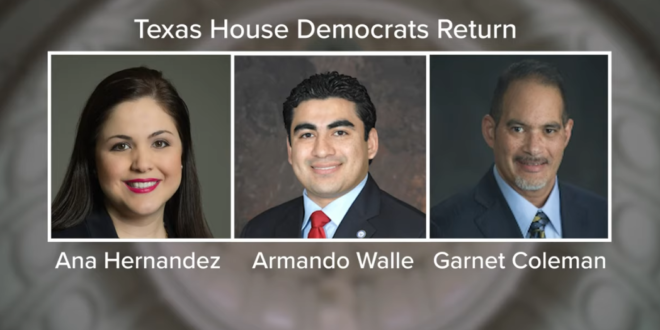 After a 38-day walkout,  the Texas House now has the required two-thirds of members necessary for a quorum to conduct legislative business, and Republicans have already scheduled a hearing on the voting bill for Saturday.

The standoff reached a tipping point last week after Republicans authorized law enforcement to find and arrest their missing Democratic colleagues and lead them back to the capitol.

Over the past few days, some legislators who remained in Texas had been nervously hopping from one place to the other to avoid being caught and brought in. Some returned home and resumed their day jobs – which many legislators have in a state where the house meets only once every other year.

The margin was razor thin on Thursday and it was unclear for hours before gaveling in whether Republicans had gotten enough members in the chamber to begin their work.

Ultimately, 99 members voted that they were present with 49 stated absences. (The regular 100-member threshold for a quorum dropped to 99 on Thursday after San Antonio Democrat Leo Pacheco’s resignation went into effect.) The House then adjourned until 4 p.m. on Monday after referring a slew of bills to committee.

Even Republican State Rep. Steve Allison of San Antonio, who confirmed he was positive for COVID-19 a day earlier, showed up to the House to help swing the numbers — though he stayed isolated in a room on the side of the chamber.