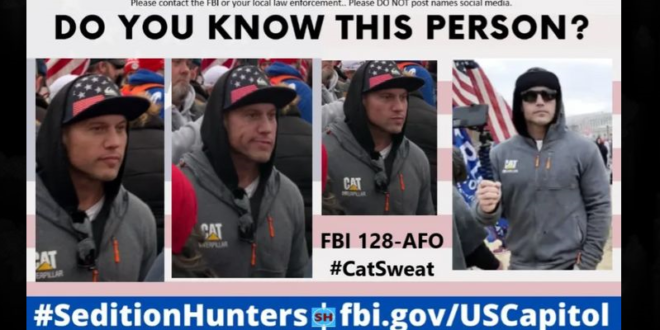 Seven months after the man online sleuths dubbed #CatSweat was photographed dragging a police officer down a set of stairs during the attack on the U.S. Capitol, the Michigan man has been arrested by the FBI. An official confirmed the arrest to HuffPost Tuesday morning.

Logan Barnhart, whom the FBI referred to as Capitol suspect 128-AFO because he was wanted for assaulting federal officers, was a major target for the “Sedition Hunters” community, which had given him the nickname “CatSweat” because he was wearing a sweatshirt branded with the name of Caterpillar.

Read the full article. Logan, a bodybuilder who was identified by facial recognition technology, has worked as a romance novel cover boy. Sample title: “Stepbrother UnSEALed: A Bad Boy Military Romance.” He has a previous arrest for rioting in Michigan.

Logan Barnhart of Michigan #catsweat has graced the cover of AT LEAST three romance novels. pic.twitter.com/j2htXPWq8e

Previous When Trump Praised A Future Takeover By The Taliban
Next OAN Loses Appeal, Must Pay $250,000 In Maddow Suit