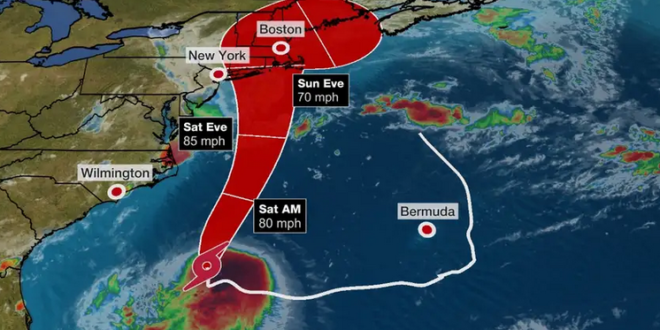 The National Hurricane Center has issued a rare hurricane watch for parts of New England, warning that Tropical Storm Henri will likely develop into a hurricane before making landfall on the northeastern U.S. coast this weekend.

“If Henri strikes southeast New England as a hurricane this weekend, it will be the first direct hurricane landfall since Bob in 1991,” National Oceanic and Atmospheric Administration spokesman Chris Vaccaro told NPR.

Henri’s maximum sustained winds grew to 70 mph on Friday, making it “almost a hurricane,” the NHC said in its 2 p.m. ET update. Hurricanes have sustained winds of at least 74 mph.

Hurricane watches were issued by the National Hurricane Center (NHC) on Friday morning for a slew of areas ranging from the South Shore of Long Island, New York, to Massachusetts’s Nantucket, Martha’s Vineyard and Block Island.

Tropical storm watches were posted, too, for some areas nearby the New York City metro area.

AccuWeather forecasters are projecting Henri to make landfall as a hurricane on Long Island around South Hampton, New York, late on Sunday morning. It will then strike southern Connecticut around midday Saturday.

This more northerly track will be influenced by the steering from a ridge of high pressure over the north-central Atlantic and an upper-level disturbance over the eastern U.S.

Henri’s circulation center is likely to move within the forecast path shown below, but whether this track is directly into New England or a bit farther west or just off the East Coast will be determined by the outcome of the steering pattern mentioned above. Impacts will spread well beyond this cone.

At least one hurricane model (HMON) shows a worst case scenario hit for NYC, but the consensus is still for a strike on Long Island. This will be damaging either way though. Hurricane Watches are now up for #Henri pic.twitter.com/xUg6GKleEG

A rare hurricane watch is in effect for New England, with forecasters warning Tropical Storm Henri will likely develop into a hurricane before making landfall this weekend — which would be the region’s first hit since 1991.https://t.co/zlpDG4CLVZ

Henri is expected to hit the Northeast, and possibly New York City, as a hurricane this weekend. The two storms have similarities, but also significant differences. https://t.co/eCMexhdfxp

We are mobilizing extra crews to respond to any service interruptions that occur as Tropical Storm Henri moves through the area on Sunday. We urge the public to be safe and stay away from any downed wires. For more information, visit: https://t.co/93kMPUuObr #safetyfirst pic.twitter.com/k4DrCZcMJs