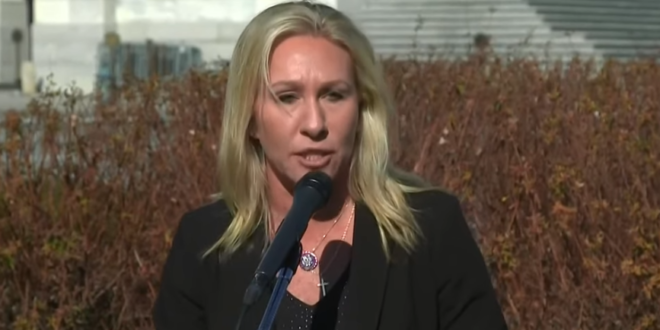 I’ve talked with numerous people who have scary side effects like Myocarditis, blood clots and miscarriages. And nearly 7,000 deaths are reported in VAERS on the CDC website.

In my opinion, the FDA should not approve these vaccines until more research is done. But Twitter suspended me for speaking the truth, and tweeting what so many people are saying.

If I dare says [sic] the truth, Twitter suspends me because the truth is so offensive to the fragile hypocrites all over Twitter! I refuse to be silent about these important life changing issues and the Communist Chinese bioweapon COVID.

After all, I’m an elected Representative of the people of Northwest Georgia — I represent the voice of my district. Clearly Nancy Pelosi doesn’t care about these people, and clearly Twitter only cares about the left’s radical narrative.

But Twitter won’t allow any real discussion of the truth from an elected Congresswoman because Twitter only cares about the Democrat Communist agenda for America. It’s a good thing my voters couldn’t care less about Twitter.”

Today’s suspension is reportedly Greene’s last chance before a permanent ban by Twitter.

Previous Lindsey Graham Back In Senate After “Really Bad Days”
Next Wisconsin Dem US House Rep. Ron Kind To Retire