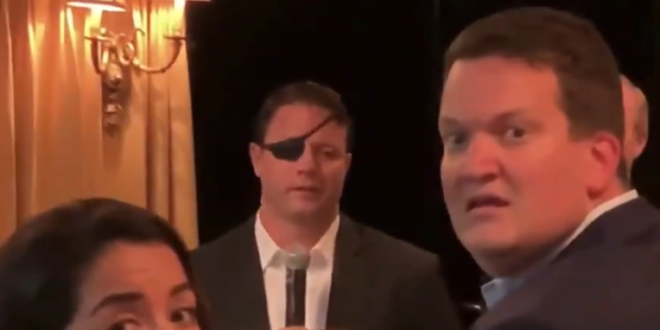 While speaking at the Illinois GOP Fundraising dinner in Rosemont, Illinois on Wednesday evening, Crenshaw was asked by an attendee if he believed in “election integrity” and whether he thought last year’s presidential election was rigged against Trump.

“There’s certain states with problems, but don’t kid yourself into believing that’s why we lost, it’s not. It’s not,” Crenshaw responded, prompting Bobby Piton, a fringe Illinois Senate candidate who believes Trump will be reinstated this year, to fire back from the crowd.

Piton, a QAnon booster who served as an “expert witness” during Trump personal attorney Rudy Giuliani’s sham election fraud hearings last year, insisted there was “plenty of proof” that of widespread voter fraud and that states like Arizona will soon flip back to Trump.

Rep. Dan Crenshaw (R-TX) gets heckled at a fundraising event for saying the 2020 election wasn’t stolen:

“Don’t kid yourself into believing that’s why we lost … 5 different states? Hundreds of thousands of votes? You’re kidding yourself.” pic.twitter.com/gj0tAb22lA

Previous STUDY: Drug Touted By Anti-Vaxxers Has “No Effect”
Next FBI Nabs Another “Most Wanted” Capitol Riot Suspect