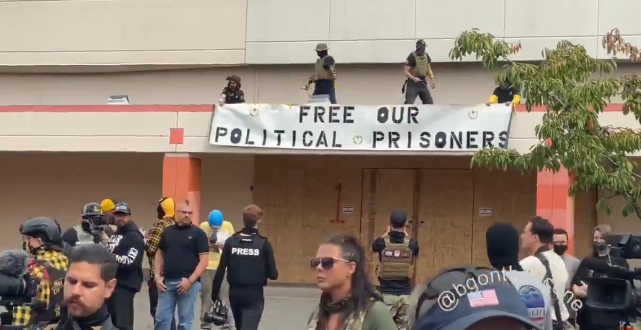 A right wing protest in Portland on Sunday has culminated in a gunfight, when antifascist demonstrators returned fire at a man who shot at them with a handgun in a downtown street. The firefight took place in the heart of downtown Portland, soon after 6pm. As antifascists followed a man at a distance who they were trying to eject from the area, he took cover behind an electrical substation box, produced a handgun and opened fire.

He fired at least two shots before an antifascist returned fire with their own handgun. At least seven shots were fired. Portland police bureau confirmed that a man had been arrested over the shooting but did not have any information on any injuries. The incident came after a day of protest descended into running clashes involving hundreds of protesters and counter protesters.

Early in the day, organizers of the far right event announced they were moving their rally from Waterfront Park in downtown to a commercial parking lot in Northeast Portland. Hundreds of people with the anti-fascist group congregated at Waterfront Park, despite the relocation. Far right activists, meanwhile, set up a stage on a small trailer in the commercial parking lot along Northeast 122nd Avenue.

Photos and videos streamed online showed members of the Proud Boys — a frequently violent far right group — gathering and speaking at the conservative event. Among them was Tusitala “Tiny” Toese, who has been convicted of engaging in violence at protests. “We’re not going to stand down,” Toese said. He added that his group was “not playing this time,” but said they did not have plans to leave the Northeast Portland location Sunday.

The far-right event was occurring at a parking lot about five miles northeast of the waterfront park. Video footage from the parking lot show participants wearing apparel expressing support for former president Donald Trump or hatred toward the political left.

Just before the violence starts, one right-wing protester can be heard taunting another group of protesters: “Antifa, come on. Let’s play, let’s play,” the protester is recorded as saying, while another right-wing protester urges restraint to his colleagues, before saying: “The second they start attacking, we will unleash on them.”

About 30 minutes later the scene erupts, with protesters shooting paintballs at each other, destroying a white van, detonating what appear to be small gas grenades and spraying chemicals at each other. Footage doesn’t show uniformed law enforcement officials.

The Proud Boys accidentally smoke bombed themselves in an abandoned KMart parking lot.

Proud Boys flip a van they say was being used to target their rally here in Portland pic.twitter.com/isXunBkBkx

Proud Boys smash the windows of a minivan driving alongside the crowd in black bloc as they retreat to a nearby high school pic.twitter.com/BJ2DYr7xXC

Proud Boys in Portland drag a guy out of his truck then destroy it and slash the tires. From @KOINNews pic.twitter.com/ijCnsmPxud

After a rally at an empty Kmart in Portland, Proud Boys started roaming the streets, destroying parked vehicles, paintballing and brandishing at random passing cars, then shot into a crowd of anti-fascists near a park. Fascist rallies mean danger to your entire community, always. pic.twitter.com/THQMpn0Yss

I’m here in NE Portland where Proud Boys have flipped a medical van and are shooting paintball at passersby. Several cars have been totalled and the parking lot of a local high school was occupied briefly.

No police on sight. pic.twitter.com/d3UtwjeMw7

A Proud Boy beats an anti-fascist counter protester after swarming his truck truck on August 22, 2021 in Portland, Oregon. Proud Boys and other far-right extremists fought with anti-fascist activists in Portland on the anniversary of a similar fight in 2020.

So they’re just having gunfights in Downtown Portland like it’s the OK Corral pic.twitter.com/X8rD9M79xH

Proud Boys leader Tiny Toese is actually crying tonight that the police didn’t protect them from antifa after they caused mayhem in Portland. From @alsoconnor pic.twitter.com/2luZAvU01O

Still waiting for the Biden administration and AG Garland to address our domestic terrorism issue. Follow Canada’s lead, and designate the Proud Boys as a domestic terrorist group. DO SOMETHING already!

It’s no coincidence that the Proud Boys chose Parkrose High School as a place to destroy property & terrorize people.

Parkrose is the #1 most diverse high school in the entire state of Oregon.
pic.twitter.com/HX9mnW6r0m