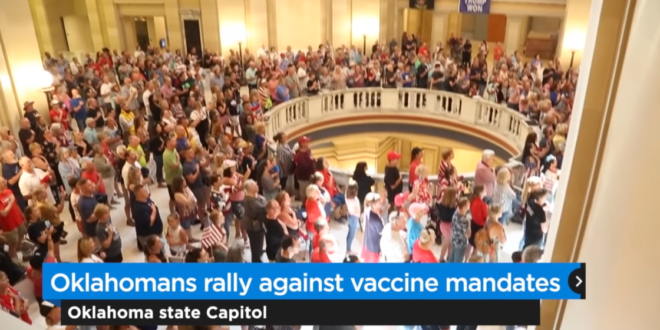 Hundreds of people gathered at the state Capitol on Saturday for what they called the Oklahoma Freedom Rally, with many protesting against mandates on the COVID-19 vaccine and masks. While hundreds of people made it inside the Capitol rotunda for the rally, hundreds more were still outside as of 5 p.m., waiting to get in.

Some even held their own mini-rallies. People inside the Capitol sang “America the Beautiful,” chanted “USA!” and recited the pledge of allegiance. Many held American flags and signs that said “no vaccine mandate,” “protect our freedom” and “mandate medical freedom.”

The rally was put on by several Republican groups. “It’s only a matter of time before you won’t be able to do anything without the permission of a communist government who will require proof of vaccination,” Oklahoma GOP Chairman John Bennett said.

He invited Oklahomans to attend the rally earlier this week in a video message. The rally came after Bennett recently made a controversial post comparing unvaccinated people to Jews in the Holocaust.

“I don’t approve of the vaccines. I approve, I thank everyone for making them, for making them available, and for them being free, but I don’t to be forced into it, because that starts to infringe on our rights,” attendee Karen Monahan said.

The clip at the bottom, good grief.

Hello from the Oklahoma state Capitol where hundreds, if not more than a thousand, folks are protesting COVID vaccine mandates. Organizers say roughly, 1,500 people are still waiting to get inside

This rally is being put on with support from the Oklahoma Republican Party, some ultraconservative GOP lawmakers and some religious groups, like the Ekklesia of Oklahoma.

The scene at the Oklahoma state capitol. People are there to protest COVID vaccine mandates. pic.twitter.com/nnm9YmxZqd

Incited by Republican leadership, by the way. I’m not even clear on what pending mandate they’re protesting. https://t.co/zDkySUOGJB

Meanwhile, at the Oklahoma State Capitol right now: Hundreds of people have showed up for a rally to protest COVID-19 vaccine mandates pic.twitter.com/72T8y30nUE

“Jesus is my savior, Trump is my president”

“The deadliest virus in America is the Media” https://t.co/sJm0rPGD8n

Previous Infected US Tourists Denied Flight Then Board Bus From Mexico, Husband On Ventilator, GoFundMe Beg Posted
Next Blinken: US Has Begun Evacuation Of Kabul Embassy