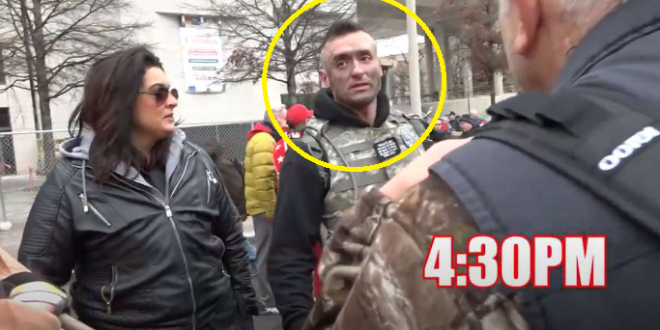 No Pre-Trial Release For FBI Most Wanted Riot Suspect

The man branded #FacePaintBlowhard by online sleuths known for locating participants in the Jan. 6th siege of the U.S. Capitol must remain behind bars pending his trial for allegedly assaulting law enforcement, a federal judge ruled.

“They maced us, those tyrannical pieces of shit, and we maced them right the fuck back and now they’re taking the building,” Lazar is quoted saying in a video cited in an FBI affidavit.

Seen clad in a camouflaged tactical vest, black hooded sweatshirt, and blue jeans, Lazar had a patch over his chest with the words: “Blessed be the Lord, my rock, who trains my hands for war, and my fingers for battle,” according to the complaint.

“At bottom, Mr. Lazar’s alleged conduct demonstrated a complete disregard for the rule of law” — Judge https://t.co/POUD3SJtIE via @lawcrimenews

A Lancaster County man with ties to GOP lawmaker Doug Mastriano has been arrested on Capitol riot charges.

Despite being positively identified, Samuel Lazar remained free for months and continued to appear at events hosted by political figures.https://t.co/Wf5BWNN6Wx

Samuel Lazar — aka FBI Capitol suspect no. 275 — was essentially a Mastriano groupie. His family has a cult-like devotion to Mastriano, who boosted his political career on the Big Lie. #facepaintblowhard https://t.co/TW6T8rXLmR pic.twitter.com/bjs4DKnZda

Over the weekend, Samuel Lazar (no. 275 on the FBI’s Capitol wanted list, who bragged about macing officers at Capitol) showed up to a rally in a “Back The Blue” t-shirt.