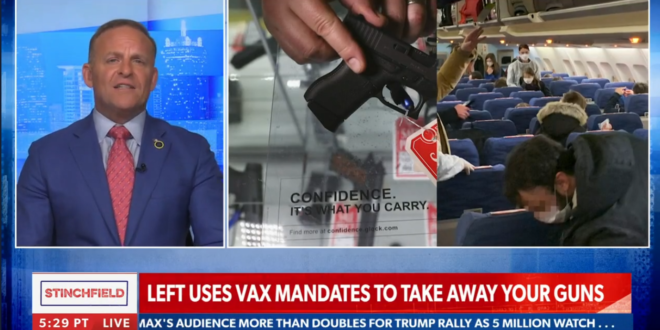 Newsmax Host: Vax Mandates Are For Taking Your Guns

GRANT STINCHFIELD (HOST): We know that one of the key components to enacting socialism in America is not just gun control, but gun confiscation. I have told you that much of the tyrannical response to the China virus is about the left’s quest to control you. Well, quietly, a plan is now underway to use vaccine mandates to take your guns. It sounded far-fetched until I actually looked at the scheme.

So the left wants to make the vaccine mandatory to fly. So if you’re not vaccinated, what are they going to do? They’ve got to put you on the no-fly list with, of course, suspected terrorists because that’s how they view all of us.

And what other bill are the Democrats trying to push? Since 2018 they’ve been going down this road — make anyone on the no fly list a prohibited possessor of firearms, meaning you can’t own guns if you’re on that list. So you see what they’re doing? They’re exploiting the China virus vaccine push to