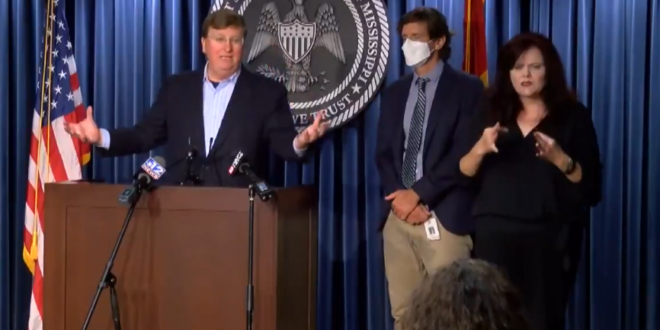 Amid Mississippi’s largest surge in COVID-19 cases and with the state’s hospitals stretched beyond capacity, Governor Tate Reeves on Friday encouraged Mississippians to get vaccinated. The encouragement came in between attacks on the press, him questioning the efficacy of face masks at preventing the spread of the coronavirus and general vaccine misinformation.

Reeves repeatedly said it is rare for a vaccinated person to contract COVID-19 or to be able to spread the virus. When asked to verify those claims, Dobbs said the vaccine does limit a person’s exposure to the virus, but it is roughly only two-thirds effective at preventing the spread of it, even among asymptomatic cases. He said there would be no vaccine mandate for state employees, and questioned whether public entities have the legal authority to even mandate vaccines.

Governor Tate is quite the dick https://t.co/rL7EbEZIyg

On the day Mississippi recorded a record amount of COVID-19 cases, Governor @tatereeves says there are risks associated with taking the vaccine, like potential side effects.

The state ranks toward the bottom with its vaccination rate at 35.5%.@WLOX pic.twitter.com/Bq4uY21xU3

“Thousands upon thousands of COVID cases have overwhelmed the state’s hospitals. There are no intensive care unit beds left in the state. No normal hospital beds, either.

There’s even a waiting list for patients to get into the medical tent, Jones said.”https://t.co/2JZWhWaL7j

.@TateReeves: “I’m not going to sit up here and answer every crazy idea y’all come up with because it’s not productive.”

Nearly every question has been incisive and intelligent. He just can’t or won’t answer most of them because they don’t fit his narrative. This was telling.

Tate argued that not very many people voted for him and that he only won because of MS’s low voter turnout—and that he can’t make a difference with other MSians. pic.twitter.com/hy0E0JLLQX