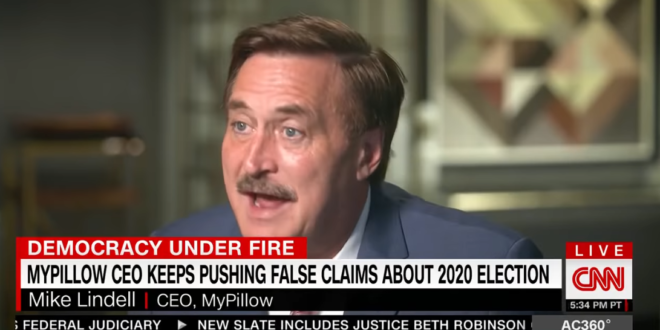 Election officials at more than a dozen counties that Lindell has claimed were hacking targets told CNN that the pillow magnate’s claims are utterly meritless. They noted that their voting machines are not connected to the internet and that the results are confirmed by paper ballots. In addition, CNN interviewed nine cybersecurity experts, all of whom said the “proof” Lindell has released so far is nonsense — and that there is zero evidence of any kind of successful hacking of last year’s election results.

The first block of data from Lindell’s “Absolutely 9-0” video, released in June, was a dramatic scrolling video of a long series of numbers in hexadecimal format, a numeric system used by some programmers. When the data is converted to text, it becomes clear that it is not evidence of hacking but a version of Pennsylvania’s voter file, listing every voter registered in the state — a copy of which can be purchased from the state government for $20.

Lindell inexplicably agreed to an interview with CNN investigative reporter Drew Griffin, and after several minutes of Griffin’s evisceration of Lindell’s election fraud conspiracies, the interview went off the rails. There was yelling. More conspiracies.

As one example, Griffin noted that the “evidence” in one of Lindell’s videos were simply images of “publicly available voter data scrolling across the screen, not proof of election hacking.”

When Lindell was told this, he “changed his story,” said Griffin, claiming that he would show the “real evidence” at his cyber symposium “streamed live with MyPillow discounts available throughout.”